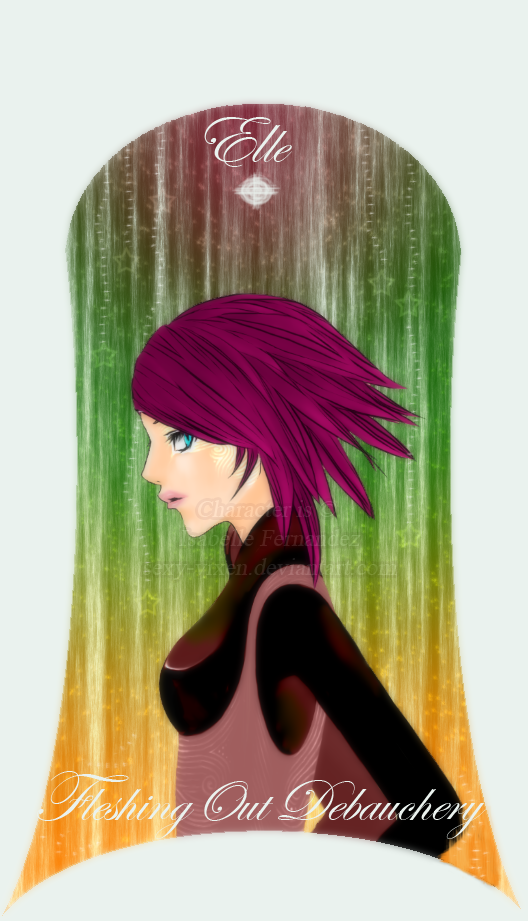 Elle is a character for an up and comining manga that i'm creating, Fleshing Out Debauchery.

She is pretty much one of the main characters in the story.
Her name, Elle, in Norse means ‘Old Age’ which i thought was great because she's an immortal plus it also helped that i've been eyeing the name for a couple of months.

She's a hard driven leader of a pack of werewolfs, which might confuse you at first but she was with them for hundred of years and matured to become Alpha of them.
She is greatly respected and serious but when she is around familiar faces she is a kind hearted person.

Her outlook on anyone out of the pack might be a little shrewd but with time she comes around, but always keep a keen eye on them just in case, her trust is hard to obtain.

She had a past mate but he died from a Vampire attack trying to defend a cluster of pups. In this world there are areas where werewolfs are together, vampires all together or mix of both breeds. In rareties, you can find immortals scattered here in there but are still scarce, though in the mortal domain they are basically treated like gods.
In the past recent years there has been disarray with some creatures in which that there minds would become savage and go mad of bloodlust, viscious attacks that would take many of men to defend against. Which is how easily her mate died of.
She still mourns his death but always ends up finding comfort in the males of her pack for when it gets too hard to be alone.

So far thats what i have writen up about, more will be scratched in but so far you can get some feeling of how she and the story is.