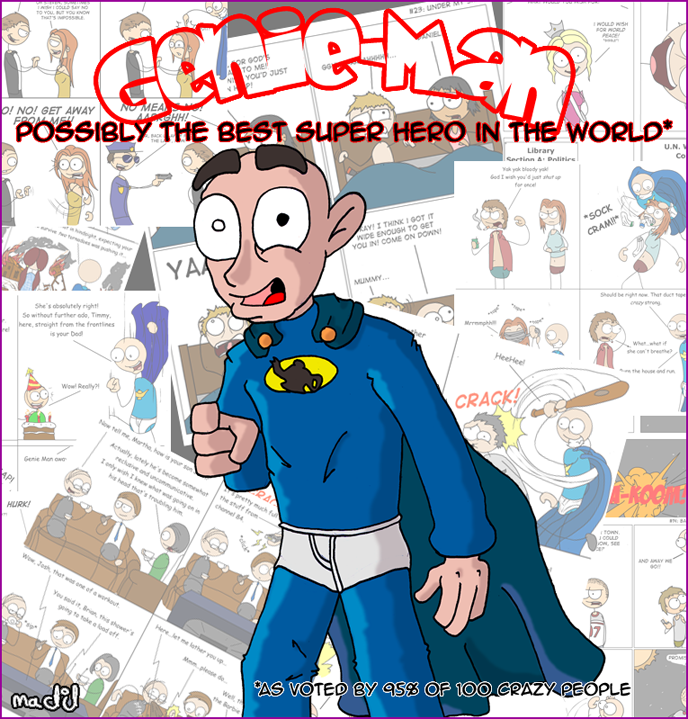 Hello? Is this thing on? Is anyone still out there??

Damn. Been a while. My bad. I hate leaving massive gaps of non-activty but crunch time at uni, coupled with tech problems, tends to get in the way.

Bah. Screw the excuses. They're pointless anyway.
Anyway, this here's a bit of fanart that the fantastic Author whipped up to break up this void a bit.
(Link: http://www.drunkduck.com/The_Author/ , since url links never seem to like working in these comments boxes for me.)

*sniffle* Not even gonna wish a us a merry x-mas?

I found a better comic than this so im not gonna kill myself YAY!

Genie-Man! Wherefore art thou Genie-man? I'm looking forwarded to whenever you can return to update mode.

I was waiting for an update

Hey, I wasn't approached by the poll!

Oh wow... That's awsome... The guy who drew this is a complete genius. I also love the guy... Just to make The Author happy

holy crap I forgot about this comic.

Oh wow... That's awsome... The guy who drew this is a complete genius. I also love the guy... THAT'S what I expect to hear, but probably wont!