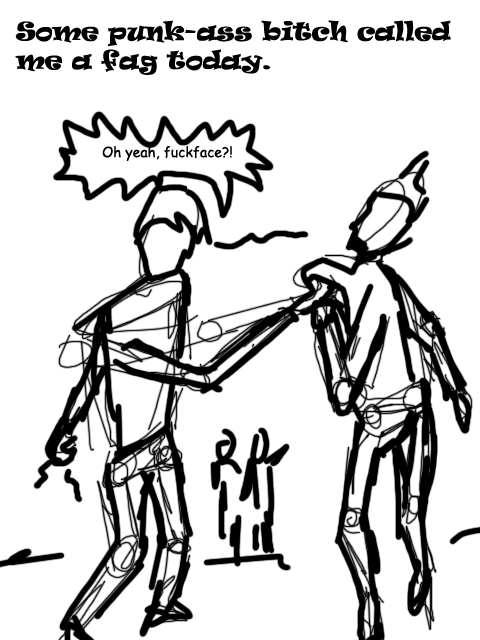 Needless to say, I beat the living crap out of the fucker. Never piss off a gay (or even half-gay in my case) guy who's half a foot taller than you. Especially if he can life you off your feet (that's what I'm doing, in case my sloppy work wasn't clear enough for you.

It's odd– this gay hate shit never happens in Ontario. This is where you see the gay banners flying with Pride (pun intended). Judging by his accent, he was just a douchebag American tourist anyways.

And yeah, I drew today's page. It's the holiday's, I have time to do it myself. I just sketched it out last minute because it didn't happen long ago today, and it's almost tomorrow by now. Maybe I'll imrpove the page later. Probably not, I'm hella lazy. This way though, i'm planning on actually posting interesting stuff instead on relying on my good ole squirt of a pal to juggle multiple comics and hardly update. Who knows? Maybe I'll update twice a day.

I Really like your drawing --- you should do this detail more often. But I question your font choice.

I like how he has his hair in a conelike manner.