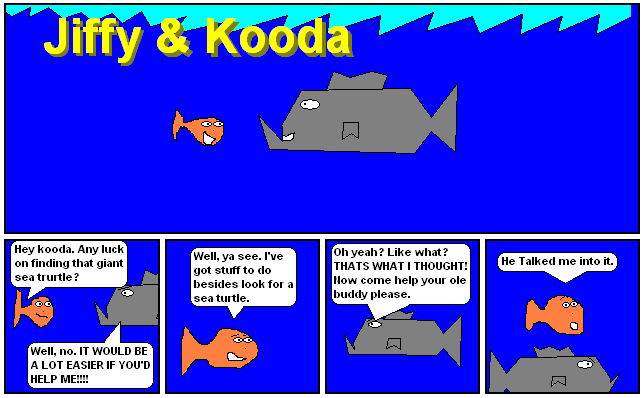 Jiffy and Kooda First Strip EVER!

Allrighty!!! Now, I wanted to introduce you to the characters of this comic. This comic will update everyday at least one strip a day! The main characters are Jiffy and Kooda. Jiffy is a fish with a big imagination. Kind of like me :). Kooda is his barrakooda friend who hangs around with him all the time. Toghether, they have some fun and exciting adventures.

I want you all to know so you arent confused later, that the Strips that are in Color will be chaptered so they are easy to find. You may have originally know this comic as “Under the Sea”. Well, I am taking the comic to the next level. This is the only comic I will be working on till the end of time, so expect good things out of this.

Note: This comic is random between comedy and story. Dont get mad if it's not funny at one point.