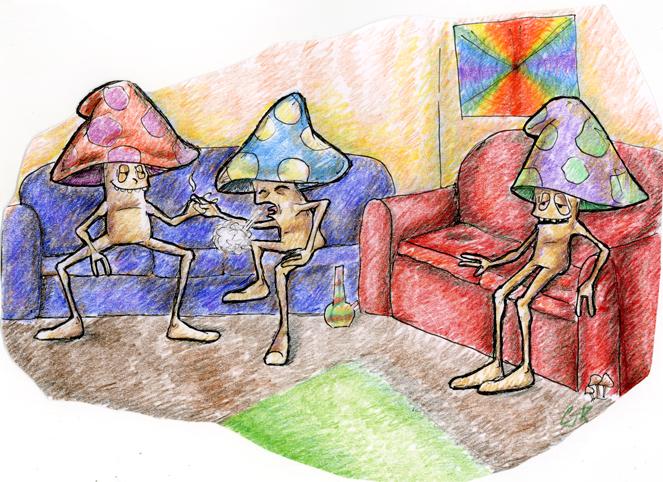 Okay, this picture was not originally for Krazy Katie, but seeing as though this comic is pretty random, and I didn't really plan for it to have any story line whatsoever, I figured this fitted. I drew it for my friend who…erm…yeah. No…I don't do shrooms, by the way, but I do love the way psychedelic art looks. So, it's been quite a while since I've updated, and I've gotta say, I haven't been working on Krazy Katie much, but I have been working on Greetings and Salutations. I've been trying to build up a comic buffer. It's been going slow, but it's coming along!

Lol, I have no clue why I find this comic so funny but I do.

Ya know what would be totally nutty? If like Mario came in and bit them because that game has mushrooms and shit in it.

Love this!! though im with aquacow. cant it be both?

wow! btw, I made a fan art for the [url=http://www.drunkduck.com/DrunkDuck_Speesheez/?p=205957]Civil War - Riot Network[/url]. See your Bowie the Ninja there ^^

Hugs not drugs? Can't it be both? Or merge the two words. Hrugs, can we have some Hrugs over here?

awesome I so would eat them