Life as an 8bit 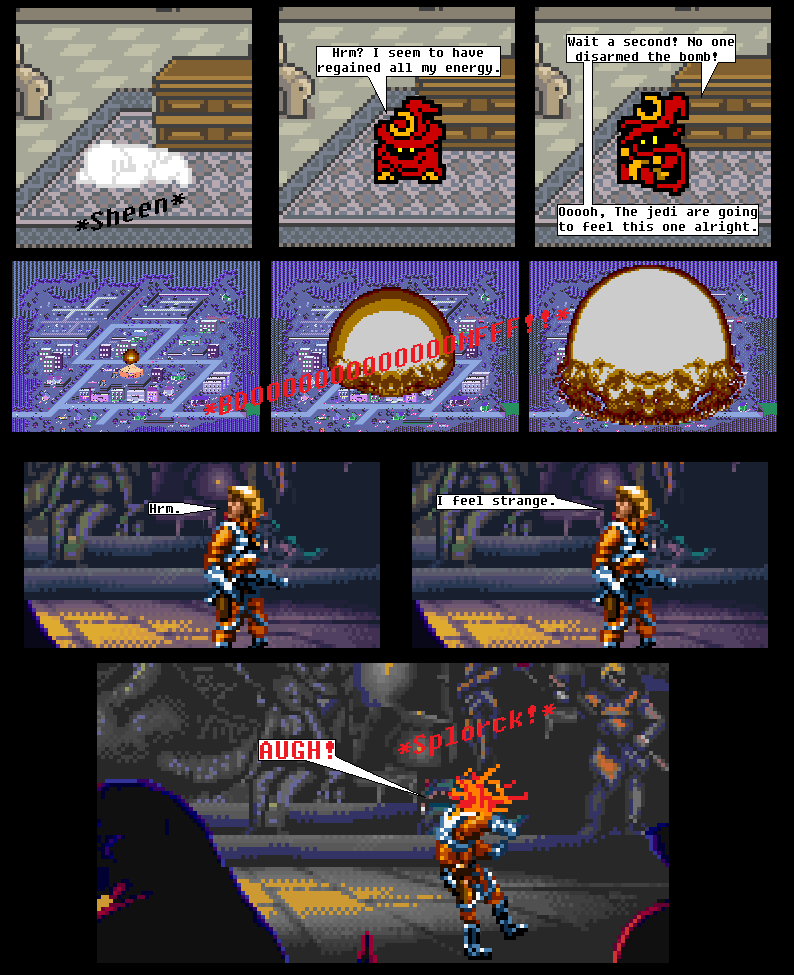 Yep. Life as an 8bit has ended… on it's anniversary to boot. It's been a fun year and all, but I just don't see this comic updating anymore. However, the fun wil continue in the forum. The comic may be over, but the lives of the 8bit will live on!

I just wanted to make some thanks.

Zephyr Light-For starting this comic with me, and updating the page so much, when I didn't know how. (Also for being such an awsome friend.)

Rengori and Donovon-For updating this thing when I was being too lazy.

Everyone who joined and contributed to this comic.

And last, but not least…
All you people who read this comic and gave it ratings! You guys rock!

Rock on. Peace out. See you… sometime.

SmartSpriter said: I never even read this comic... Isn't 8-Bit Life, like, the sequel or something? No, I just like making a sprite community project, and I prefer 8-bit over 16-32 bit sprites.

I never even read this comic... Isn't 8-Bit Life, like, the sequel or something?

damn! i just created my 8-bit sprites to join this comic!

You know, this is the only reason I joined DD in the first place. If it wasn't for this comic, there would be no Pokemario or LeoTH. At least start another 8bit comic with these guys.

Aw well, it was a fun read.

It Was Good Knowing It.

NOOOO I ONLY HAD ONE COMIC HERE~!

This is what happens. I tried to tell you guys THIS IS WHAT HAPPENS!

TinyPet was it? ... Anyways, you seem to have blown up my hand. And of course, the obvious reaction is to sue. ... I'm suing, so give me all your stuff.

hahaha we blew up the town! but I am sad. It was too short. :( :(:(:(:(:( SHIZNIZSHIZNIZSHIZNIZ! !! I would start it up again but that might be stupid. And also it definitely wouldn't be the same. i am teh sad. rant rant rant

Just in case. Besides, it just feels right. Technically, he would be the default assisstant.

okay what's the point in having an assistant (zeph) if the comic is dead?

If I make a new comic, I doubt it'll be a sprite comic, or update regularly for that matter. I don't have much patience for spriting. I dunno why, I just don't.

Awwww...oh well. At least we got to go out in a horrific town-wide explosion. It was fun, Magey! Maybe now you can start a different comic!

Alas poor 8Bit. This was the project that really helped me loads in making comics, since I had to make my comics up to standard. So all I can say is this: Thank you 8 Bit Bluemage for helping me improve my comicing.

Argh, she be a cruel mistress. Farewell 8-bit.