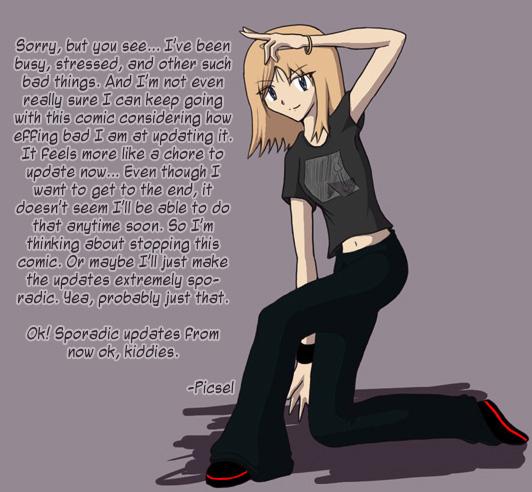 EDIT: Erg. Just realized it was April Fool's day. Soo… This isn't an April Fool. >> I really do mean it with the sporadic updates.

Sorry. The way things are going, I don't think I'll be able to continue this comic any farther. I apologize for getting everyone's hopes up. Things just suck right now. :|

I feel guilty.. I mean, I only got to page 26. O.o If I had motivation and time, I'd definitely work on it. But... I can barely even get my other comic's story finished. I'm real sorry. >

aww... no problem... just take your time working on the comic... and when you come back I bet you'll produce pages even better than before! ^^

Not really. Just stopping the comic on whole. Unless I happen to think of an interesting story revolving around a similar background story.

im just curious are you also debating over deleting this comic and remaking it?

It's more the whole general idea of the story, not just where it's going. Once again, I'll see. It just seems that I'm not very interested in drawing LD at this time.

if you dont like the direction the story is going in then change it.

I'm so sorry!! I'm debating right now whether to continue the comic right now... When I think about, I don't like the story at all, and the art isn't what I'd like it to be... I'm also trying to finish the story for this other comic I want to do (which I seem to be neglecting as well)... So I'll see... I'm sorry that I can't give you an estimate. >

im just curious when will the next update most likely be?

I like this comic. Don't drop it. I say go sporadic!!! It's better than nothing... much better.

wow, I found u again, been awhile but u look like u r doing very well with this conic, good luck..

Sorry, I had IB exams so I spent all my time concentrating on that. >> I can work on comics now without feeling [i]too[/i] much guilt so I'll be able to make a new page soon. ^^

XD I remember that old layout, ah yes the times.... Hope you get going again =)

Terminal: !!!!!! Dude! Even the old layout and everything! That's crazy. O.O Where the heck did you find that? xDD

Dude, I must show you something, something that will prove the internet remembers everything. And I mean everything. [url=http://web.archive.org/web/20050204024453/www.drunkduck.com/Lucid_Dreams/]old ld site from middle of 2005[/url]