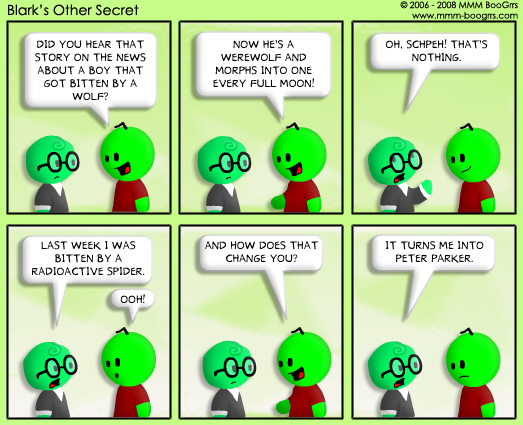 Not the best, I admit (I am still waiting for that GIO - Genious Idea Outbreak), but definitely a lot better than most comic strips in the newspaper. Honestly, a lot of them are losing their humour. Even the Archie comics are getting retardedly dumb now … or is it just because I've grown out of that stage? Oh well …

In the meanwhile, I hope this strip will suffice. I know I've deprived you guys of this snotty godness for well over a month, but bear with me while I get my life rolling again. Personal issues, major decisions and social deprivation has played a role in my slow updates, but things are quickly catching up and improving. I can't promise constant updates for a while, but at least I'm not suddenly deciding to quit MMM BooGrrs because that would just be tragic. Like discovering that you're pregnant, or that you've gained 20 pounds. Or something like that.

I was bitten by a radioactive spider and all I got was a giant tumor.

Old school Peter Parker or Tobey Maguire P.P.? (Lol, PP) XD Personally, I'd prefer going old school - nice and unrecognizable amongst the populace X3 (And it's not just you, Archie started losing 'it' for me almost a decade ago) Sporadic updates are A.O.K.; glad to read that 'things are catching up and improving'. :D