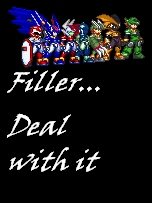 Filler… deal with it

were do u get the sprites from?

new comic started as promise. check it out

guys just forget this comic, i said i'm restarting this comic, possibly after the new year

Would you mind if I joind in this comic?

if anyone's reading this, i updated my remberance comic with tons of new sprites. Go check them out

i'm starting a new comic that focuses only on one character. I just need the weekened to work the sprites, and i'll start it. Don't worry, the cameos will still appear, along with my three oringinal characters... make that four including chaud

:D I know! Aint i evil? but uuh its still just got one pose xD

Um, weeell i ahve a sort of... upgrade to my hseet with another stage of Kins biometal... Its like... evil, seriously powerfull and shit :0

I sended tengu to Guncannon a long time ago!

*sighs* since i got the free time, i'll jsut go and do the comic myself, while gun gets seacow's and blackhook's sprites. *turns on MS paint* why are you looking at me like i'm some low class guy?

I have yours... but not sea cows nor black hook

I tought you said you HAD them :0

well could you guys PQ them to me?

The same here, I just made it because I wanted to try making a Model....

Hey use my sprite as you want (well... almost) its not like i have any use for them :p

Oh, and btw, i made Xor. I'll post it on rememberance soon after i get a few more moves done, since he's not neede right now anyway

Alright Blackhook for his Tenguman model Evil Pumpkin for his Pumpkin model Sea cow for the ninja guy You for the Guncannon, Protoman, and Winged Guardian Nox for... Nox Me for the Searchman, Slashman, Bass, and Colonel models and i think that's it

ok, Could you Give me a list of the people who's sprites you have, Then I'll get it done

@Guncannon: I really feel like it @Blackhook: Yes i do have a plot. Look at the banner at the top of the screen! -_-

...Does it mean that you started a comic without thinking about a plot? Who are you? The maker of Bob and george? XD If it helps to make this comic better then go ahead