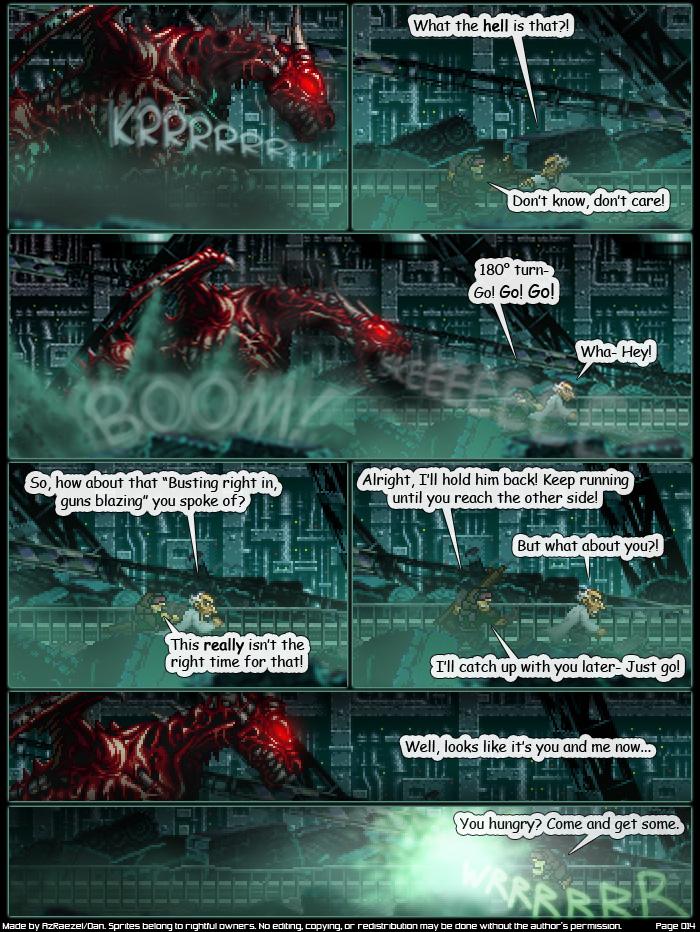 4 months and 11 days. I'm trying to find a non-dead comic I can point at, but alas, no such comic exists to my eyes yet. Yeah, I'm pretty much the worst person when in comes to updating (Besides Duke Nukem Forever, but you don't mess with Duke Nukem), but it's finally here. I'm excited on when the next update's gonna be. Probably not until the end of school, since next 4 weeks and weekends will be full of testings and exams. Joyous!

I admit, I honestly don't have any reasonable idea why it took me this long. Last two panels however took me two hours. I had to entirely repose the monster twice and the gun effect at least 6 times (Too big, too bright, too much focus, still too big, too much effect, too blurry), not to mention arranging them so that they'll flow nicely. I tried, but the left end of the last panel is rather disappointing, considering they were not that far apart (Their positions fit in a single panel).

That brings me to another thing: Custom Photoshop brushes. They look so good on the preview picture, but it never seems to work out the way I want it to when I use them myself. I was hoping to make good use out of several of them until I ultimately decided to do the effects myself. The onomatopoeias on the last panel is my handwriting. Lot faster than putting in text and transforming it, I have to say.

In any case, that's it for the day. I've taken a long break from Team Fortress 2 (6 Days now) and decided to go back into Half-Life 2 Single-Player mods. I'm not enjoying most of them (Instant-kill exploding fastcrabs? Seriously?), but it's certainly better than having some 12-year-old (Aimbot-speedhack optional) swear as he dominates me and others.

There, there. The sporadic pageviews will mean something one day.

N-no... bullshit... This is the greatest comic I ever read and it doesn't update... [B]NOOOOOOOOOOOOOOOO!!![/b]

School's started and I'm a lot busier than ever with these classes! But in the end, I'm looking forward to update so I can at least temporarily get this damn thing out of limbo.

Tl;dr, this comic is taking a break. [url=http://www.drunkduck.com/Angry_Ninjas_And_You/index.php?p=566648]Going to work on this[/url] until all loose ends are tied up.

Damn it, some complications over the Summer forced me to make extremely drastic changes to my plans. Oh well, spriting hasn't been going good lately and I've unexpectedly fallen short on my studies as well. But that doesn't mean I still can't do my old habits. Luckily I can still draw out stuff out of my desk, albeit at much lower standards in which I'm replacing it with hopefully creative ideas. Go check out Angry Ninjas And You via my profile since Metempsychosis will undergo drastic slowdown/h...h....hiaaaaa.....he... hiarrrrr... hiatuh..... hiatur- fine, hiatus (If you haven't noticed I absolutely loathe this word) until things resolve, which will take a while. Life's full of regrets. But what do I care as long as I can pull through in the end.

Okay, I'm now through with tough sections of exams now (Finals and such look rather easy compared to what I had to take recently). I'm working on a replacement cover page that shows more at glance. God help me if I can finish it by weekend's end. ...Damn, Odin Sphere's so damn fun. I'm currently on Pooka Prince, and wow, Cornelius kicks serious ass.

You're indeed alive. :D JUst try to update every once in a while. (School's annonying for me too. Notworking on the comic during the examination period is totally understtandable - my GCSE's are in a few weeks. Just make sure you have an idea of how you're gonna set out the next strip for when you're done with those nasty exams though. :P

You're indeed alive. :D JUst try to update every once in a while. (School's annonying for me too. Notworking on the comic during the examination period is totally understtandable - my GCSE's are in a few weeks. Just make sure you have an idea of how you're gonna set out the next strip for when you're done with those nasty exams though. :P