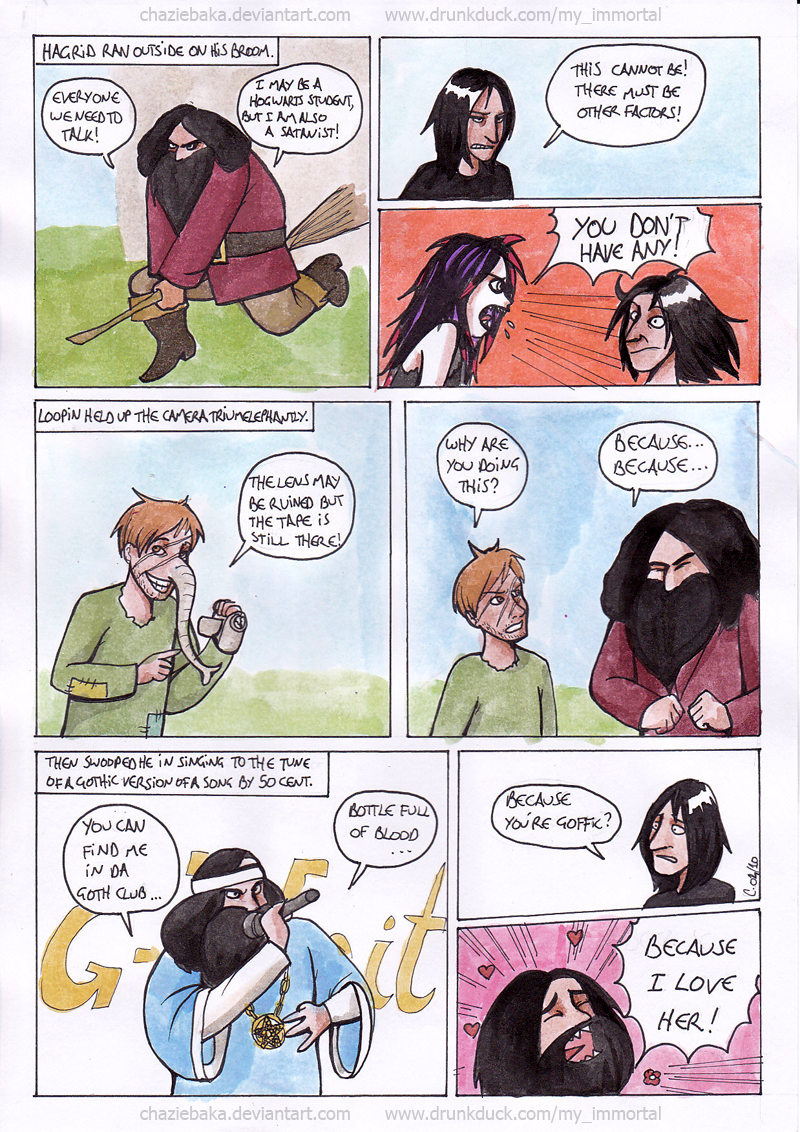 For some reason I don't understand, I love this! Wonderful, more Snape! I couldn't believe it when jk killed him off. Tacky. I like to rate and this is a 5. You are faved!

I have been waiting so long for an update. Please don't abandon this project. It is awesome.

Oh my. This is amazing.

Oh my gosh, this is SO amazing! Please continue making these comics! I can't wait to see what grammatical errors cause later on xD

ahhh this is almost better than the actual fic! but the horrible typos make the cake!

I have no Idea what is going on and I want more : D

I have laughed myself to tears. Please update again soon! :)

I wish this would update! Seriously, funniest thing on the internet!

I've noticed that despite how shittily this story is written, she managed to write Snape pretty well in character. Funny. BTW, here's a treat for you, children - a dramatic reading of "My Immortal" by Bennett the Sage - amazing stuff.

Please update this soon.... It's hilarious and you're a great artist. The terrible story and your awesome art are a great combination.

This is so fantastic, hardest I've laughed in a while! Pretty please make more!!

*chokes laughing* even if this panel was JUST Hagrid running in on his broom-- it'd still be super hilarious.

This is bloody brilliant. I was totally going to do comic version, and I had some concept drawings, but then found this. I'm nowhere near as talented as you are in drawing, this is just awesome. I would have ended up using pencil with few coloured accents, just when Tara mentioned colour...As well, it would have been word-for-word, bad grammar and all... but your interpretation is amazing! :D for sure faved! Update, please! :D

I have tears pouring down my cheeks from laughing.

YOU DON'T HAVE ANY!

Ohgodohgodohgod. I frellin' love this :,D Your art is so pretty and your interpretation of the fic has me in TEARS. I hope you update soon xD

That first panel cracked me up. Amazing parody - well done.

It's updated, yay, and oh wow, this page is probably the best yet. Especially Hargrid running on his broom and then swooping in singing to the tune of that Gothic version of a 50 cent song.

That Hagrid quote has to be one of the funniest in the whole fic! 'I may be a little Hogwarts student but I am also a Satanist!'... non-sequitur much?

omg I had never heard of this before, then a friend told me all about it and found this comic. The story is so bad it is awesome and so is this comic.

I think this is my favorite part of the entire fic...