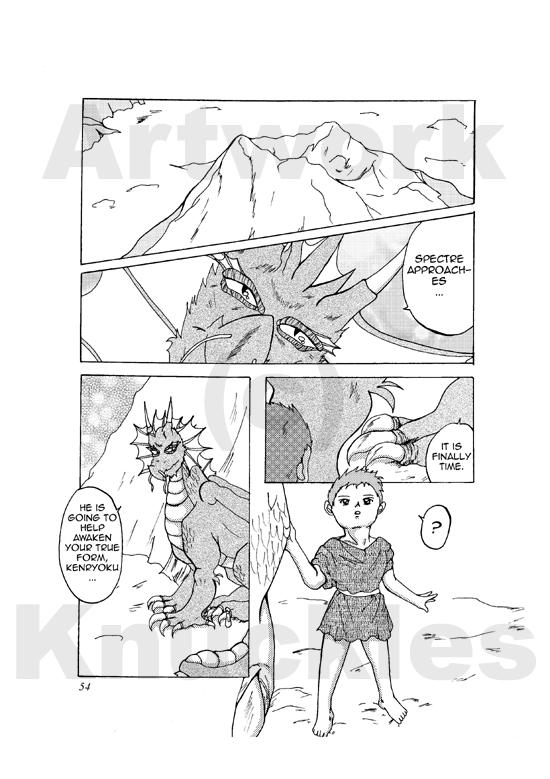 Okay, to clear up a few things from last page:

A new character was introduced – Ember, a young male Fire Dragon. He isn't the same Human male child from the previous chapters. He's sort of the comic relief of the story as it progresses, and he is a fun character I like to draw :)

The Human male child in the last panel is indeed the child from the previous chapters – now only two years older and barely walking! ^_^;

Also, “Kenryoku” = Power (yes more wordplay :P). There's a reason why he's named that, but that will be revealed later.

Oh yeah forgot, just added this to my favorites. ^^

Woww, this is really neat. Great use of gray tones, great action wonderful characters and a great story line. Yes, I'd definitely hit this with a high rating. It's colorful in it's own right. Also, great website design, love the snowflake effect.

Thats really very cool, and this story is coming along nicely. not gonna lie, you've got me hooked. :)

I can see things getting interesting, good work :)

LOL Yes, Gold and Silvers are the goody-goody Paladin-types (moreso Golds). And thanks for the comments! I'm glad you're enjoying the story!

Believe me i intend to. your comic rocks. and i didn't know that all the dragons are capable of this. I just remember the gold dragon...which is my favorite one...they are the goody goody of the dragons but you know that. I dont own the draconomicon, i just read it at a comic book store till the owner told me to get out cause i wasnt paying for anything...lousy comic book store owner...anyway I dont even like to play sorceres as much as I like to play paladins. but tht doesnt stop me from saying that I like your comic and can't wait to see more.

Krensada: Yep! Actually a lot of my fantasy stories are based on actual D&D campaigns I've played in, and I use a lot of references from D&D. I have the Draconomicon too! ^_^ I love that book. Actually, it's not just limited to Gold Dragons. All Dragons (speaking of the Chromatics and Metallics) have the ability to shift into other forms and mate with lesser creatures. In Forgotten Realms, you can't really mix and match elements (ie: A Red Dragon can't have a child with a White or Silver Dragon and vice versa). However, in Never Fade Away, such occurrences are possible, albeit HIGHLY rare to happen. An example is the case with Kenryoku. His mother (Kasumi) was a Thunder Dragon, yet he has an Ice element. Sound weird? Well there's a reason why it happened! Stay tuned.

That reminds me of what I once read In the draconomicon (a book Written By the wizards of the coast corperation having to do with the D&D universe) that certian gold dragons have been known to take the form of humans and thet married a human while in human form and eventually had a kid with them. such children were the descendants of those that are of the sorcerer class according to the players handbook. i know your work has nothing to do with that but it just made me think of that when i first started reading this.

oops sorry I got confused it's anew character. ^-^" *emmbarrased* sorry! seriously!! yeha that is the little boy though he grew up aws such a cutie. ^O^

Yay wordplay! I loves it!