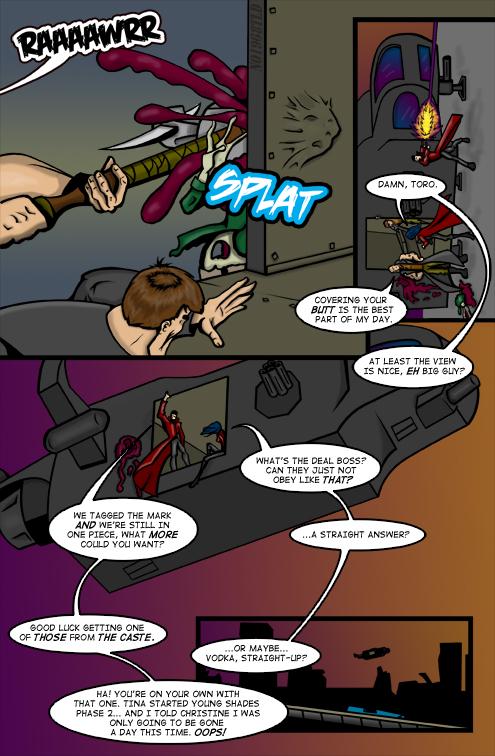 Toro's consistantly been a butt-whoppin' machine and he really splattered that zombie. Oops! I love the way that effect turned out.

Every page of this issue contains one or more “pop culture” movie reference(s). There's TWO on this page, can you spot them? They're both VERY DIFFICULT on this page. HINT: one is on panel 1 and the other is on panel 3. ;)

As always, comments are very appreciated.

You guys are all so wonderful. Thank you so much for being a fan and for all your comments!

Nice keep up the good work!!!

Wow, wonderful job! You might practice drawing hands a bit in the future, but overall this is an upstanding comic. Keep it up!

thanks everyone! And nope, it isn't blade. Why don't I say: it has to do with George Romero.

It works better with Sound Effects added, in my opinion.

zaneeba - Good guess, but nope. Generally, the hidden references have to do with zombie flicks.

tina turner and christine the car from the stephen king book :)

I put the original text back into Panel 1. The text in Panel 1 reads NO1968TLD. Reference: Night of the Living Dead was released in 1968. ;) I used it as this VTOL's nomenclature. There's till 1 more... and I'll tell you it has to do with the names he uses for this daughter and wife in Panel 3.

Ian - Actually, I had text AND sound effects in panel 1, but removed them because I thought they detracted visually from the panel. Maybe I'll republish it WITH effects? Thanks for all your wonderful comments everyone!

Reminds me of my own stylisations actually. Rich colours.

Overall, a good page. The vert panel is odd. I can see why you used it, but it's jarring. There isn't a sound effect when zombie goes splat, in fact none on the page. I think it needs some. (That's why I gave you a 4.) The imprint on the inside of the metal reminds me of a movie poster, but I cannot place it. I thought was Frighteners but it wasn't.

Good page, I couldn't figure out the references thought. I thought the one in panel 1 might have something to do with the number on the door.

wow that zombie got metal to the dome peice. awesome comic my man.

your art is so cool :3 I like the way the blood oozes out of the guy when he gets smooshed lol