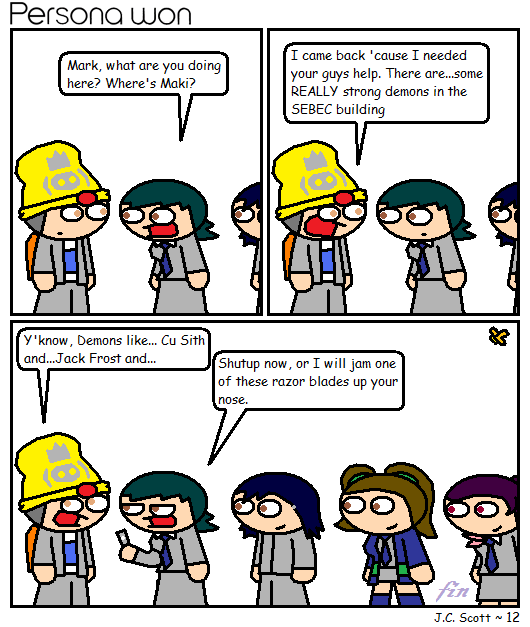 If you stick around to the end of the credits, you get to see this scene of Mark coming back to see the others. I like this scene, because it kinda shows where the Snow Queen Quest happens canonically. Technically it happened, and then everyone in the SQQ goes off with Mark back to the SEBEC building. Presumably they meet up with Maki, and eventually Reiji. This explains why every Persona character in P2 remembers the events of SEBEC, even Yukino who you can't have with you on that route.
Story wise it makes sense, but gameplay wise…these Snow Queen folks are gonna wipe the floor with any enemies on the SEBEC route lol
Anyway…this is it. This is the end of Persona Won. I know it's been long, and I know it probably wasn't as good as Persona 3 FTW or Persona 4TW but…I really had a lot of fun working on it. I spent over a year just working on it by myself in secret, and it was nice seeing it all pay off. It reminded me back in early 2009 before P3FTW even updated and I was just having fun and hoping it worked out.
It means a lot to me you all stuck around to see it, and now that it's over, I'd love to hear what you all thought of it.
Now then, the news you all wanna hear…Persona 4TW Add-On will be starting on Monday. So be sure to check out Persona 4TW's page starting Monday for weekday updates into those new comics.
Farewell.

I actually enjoyed this more than P4TW XD

I actually enjoyed this more than P4TW XD

This comic has been nominated for a Drunk Duck Award. Swing by the Awards comic or forum to see what it was nominated for.

To blackhook, your idea for the next installment's name is genious.

Ah such a nice end...especially the fact that brown is missing XD Good job mate. Ya know, if you decide to conclude the FTW series I wish you good luck. Persona 2 the max!

I've been a huge fan of your FTW series since P3FTW (I started with the Candyman comic) and have made it a part of my daily routine just coming here and reading a new page of it. That being said, this one is absolutely hilarious, I think it definitely says something about you as a writer when you're able to take a really dark game like this and make it this funny. Loved it and will definitely stick around for Add-On and Gold'n! (And for Raidou for whenever it comes back)