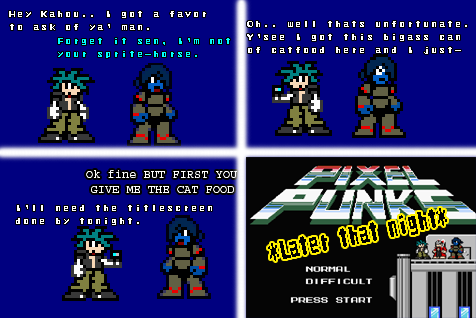 First issue of pixelpunks. Actually, this was a gag I threw out while waiting on Clarence to finish the pixels for the title screen. Hence the low production value's.

NOTE: If you haven't seen District 9 you won't get the joke, at all.

Anywho, higher production values may or may not be included in the next comics. It's basically whatever we feel like doing/uploading.

As for Sen, I'm working on a new flash. Painfully slowly. Basically, doing a flash means I need to sprite more Sen. So new comics may come before the new flash. (Most likely, actually)

We MAY be doing comic's in three totally different directions, but it's all coming up here on the same page.

Well I'm thankful for your patience, I guess. As I said, the higher production values are coming. I lost everything I had (comma) on my desktop. So, basically, I had no backgrounds, I refuse to use any sprite I didn't make myself (Yes these are all scratch so far, which isn't saying much since it's 8 bit) and I'm currently reinstalling everything I need to get back into gear. I now have two flash movie's lined up for the near future. It's monday so I'm gonna be consumed with college for most of the week, but I'll do my best to give you guys something to vote 5 for ASAP