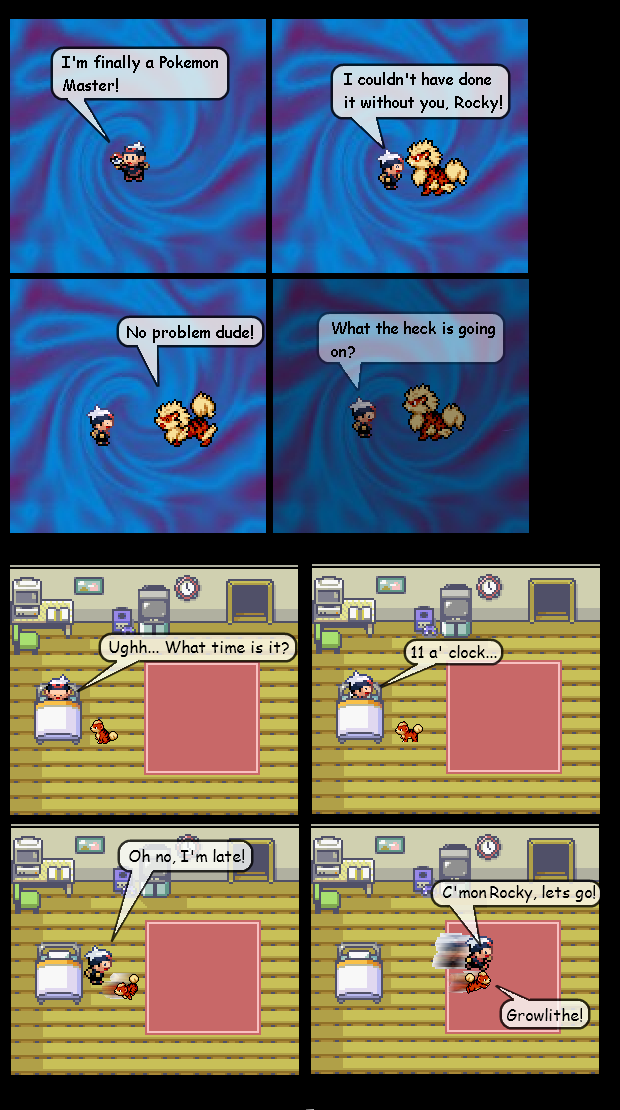 By the way, who should have which starter pokemon (Brendan has Growlithe)

The trainers will be:
Ash
Ashley
Gary
May

I combined the starters from R/B and Yellow, so i want to know who should have which.

Oh, and also, I cast my vote for May having Eevee.

hey, when do you update?

No, Kevin has a good idea, I might just use Johto starters or poke, to be original. I just have no Johto Mystery Dungeon sprites, so I'll have to make the battles different for a little while. And yeah, I really messed us Brendans motion blur. I just cant get the darn magic wand to select Brendan...

[quote]Ash: Pickachu (or Charmander since PIckachu isn't a starter) Gary: Squirtle Ashley: Bulbasaur[/quote] NO NO! DON'T STEAL MY CLICHE! THAT'S BAD! ... Or Recon's for that matter.. None of them should get ANY starters. Make it completely original. Try... Some Jhoto pokes, maybe.

may gets squirtle, ash gets pikachu, gary gets eevee, ashley gets bulbasaur....i dno:P

u read pokemonx dont u?

[quote]Ash should get .... TEH EVIL PIKACHU.[/quote] I'm not popular enough to be copied yet!!! I can't be!!! Anyways, the humor isn't too funny, but it's good, as this comic seems to aim more towards the 'serious' side of the scale. However, I don't really think that the effect of Brendan running looks good at all. I'm guessing that you used another program to make that blur and then you copied it into the program being used to make the comic, resulting in all that unessessary white areas in the blur effect. Work on it. And Rocky as a name for a doglike PokÃÂ©mon in a comic? Where have I seen this before....?

Thanks for the votes! I'll tally them later. I was trying to say out of those, not counting Growlither and Brendan.

ZOMG You have Growlithe as a starter too!

Ctually soonmme it goes Ash: Pickachu (or Charmander since PIckachu isn't a starter) Gary: Squirtle Ashley: Bulbasaur May: Eevee (or Pickachu if Ash Charmander or Eevee

this is very good (how do you make speech bubbles like that and i do have Paint.NET

Agreed. Ash should get .... TEH EVIL PIKACHU. Gary should get Squirtle. Ashley.. um, lets see... Charmander. But this is only my opinion.

yea i think may should have eevee too