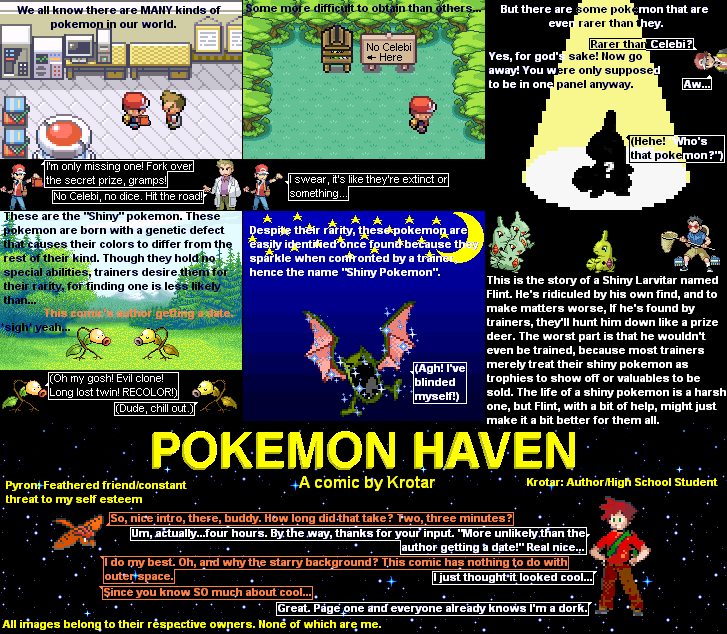 This is a revamped version of my first page. Get a good look at the first one while you can, cuz soon I'm gunna take it down and use this as a substitute. I forgot how long it takes to make these comics! I must be rusty or something.

One of the reasons I started spriting is gone nowT_Tall hope is gone;_;!!!

I forgot about reporting all the posts that demand updates =[ Too lazy to do it now...

YAY! THE ACTUAL PLOT FINALLY STARTS AFTER >150 COMICS AND A WHOLE BUNCH OF FILLERS!

http://themechanicalmaniacs.com/guides/spriteguide.php#Pre-sprite1 /\ Sprite rip guide chapter 1) Just curious, but how do you favorite comics?

try this: http://www.spriters-resource.com/nintendo/pokemon/pkmndung/ if it doesn't have them all, it'll have most of them, and has mugshots, but still need recolored

I don't know how to rip sprites. Besides, don't you need the actual game to do that?

Rip them yourself :P Furthermore, you'd have to recolor them anyway.

@Superpee: Yeah, I was having a lot of problems with that. At first the text was blue except for Pyron's, but then the panel with Golbat came up. Then I tried black or white, depending on which showed better, but then panel 3 was making an arse of itself. Then I thought of putting the text in filled in color boxes, but couldn't think of a way for that to look good with the big bunches. Any suggestions on what I can do to fix it'd be really appreciated. @Ace: Well, I'm having trouble finding a site with all the PMD sprites for all 490 some pokemon there are. I don't want to swap to PMD and find out I can't find any sprites for a specific pokemon.

it's been a while since you updated

are you gonna use pmd sprites or r u gonna keep it your way.

Text is unreadable sometimes, due to the background. :(

In retro-spect I think I laid the self depreciating humor on too thick with this one. Kinda makes it less funny and more sad. I'll edit it in the morning.