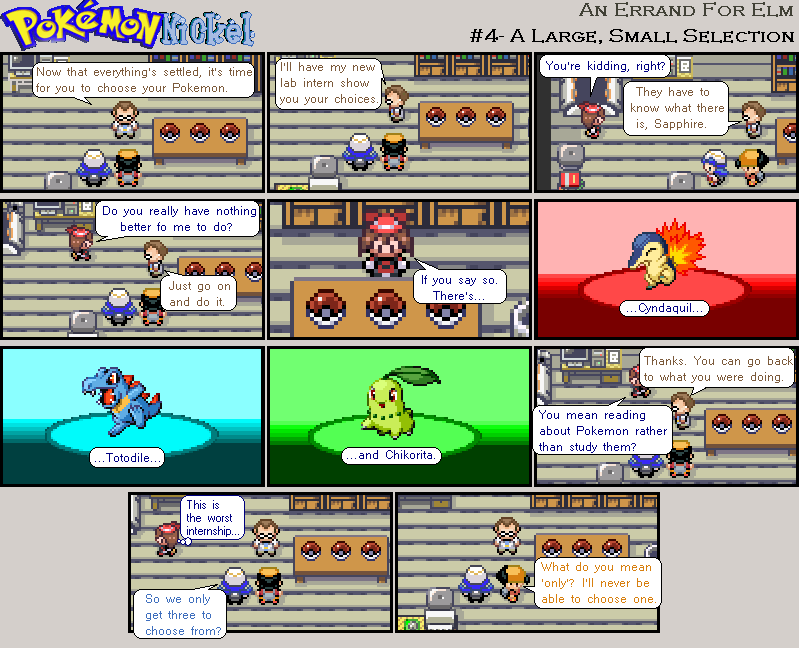 Why is there some unwritten rule that says all sprite comics must be (or at least try to be) funny? (Are there many out there that succeed in being funny? I can only think of one that's ever really made me laugh.) I'm not a funny person, and any attempts at humour seriously hurt my writing (which is very apparent from these first few strips). As this is only getting worse, I'm going to stop right here. Otherwise, this comic will turn into one of the millions already out there that strive only to please the readers and I will strain myself and begin to hate doing this trying to come up with an actual joke. This page isn't meant to be funny either, but seems to come across as a bad attempt at it. I apologize. From now on, I'm going to do as I should have from the beginning and focus on the plot and characters and tell the story how I want to.

Of course, just stopping here wouldn't be such a bad idea either. The world needs more Pokemon comics that aren't based on FR/LG, but I don't seem to be helping the problem any. This may be much better in comparisson to earlier sprite comics I attempted, but I stil don't seem to be at the level where I can produce a worthwhile comic. If I can't straighten this out in the next few pages, I'll admit defeat and stop wasting everyone's time here.

Putting the heroes from the Hoenn games in is something I'm still slightly hesitant about doing. When I began writing the plans for this comic, they became characters without much thought. Red and Blue get to be in it, so why shouldn't they? Since at the moment I'm feeling like I'll end up scrapping this project pretty soon, I figured it couldn't hurt to allow them in. After all, the GSC games take place a couple years after the others, and the main character in RSE is from Johto, so it makes sense that he'd eventually return to take the gym challenge.

wow, no update for 4 years! lol

Congratz, you posted on a comic that hasnt updated in 2 YEARS!

Self plug for the win >:O Haha, this is when I still rated X-D

o-o Cooooooome back! We like your comic! Oh, and we don't need humour, your script, art, and details make this one of teh greatest comics around!

Please come back. I want to know what happens. It doesn't suck! mine does though!

Lupalynn...this comic doesn't suck. Please come back! This could be like your big break or somethin! It's been a year and all of the nice readers want to see more of pokemon stuff that doesn't suck! I may be one of those Pokemon comics that suck... but please come the heck back! NOW!

ok,i love ur comic vut can u please update,or did u quit,please say u didnt quit...

awwww from what that NLI says this comic hasn't updated.... that sucks.... I really like it...

Hey, if you want i can be your assistant! I have sprites for pokemon. I also have ruby/ sapphie/emerald sprites as well! I Can help with the plot but i only have completed ruby/sapphire places. But we can make more! What do you say (i also have sonic and shadow sprites that work for pokemon)?

Choose the green pokemon. I chose that one and still trying to get it at level 100.

I think they are the manga names.