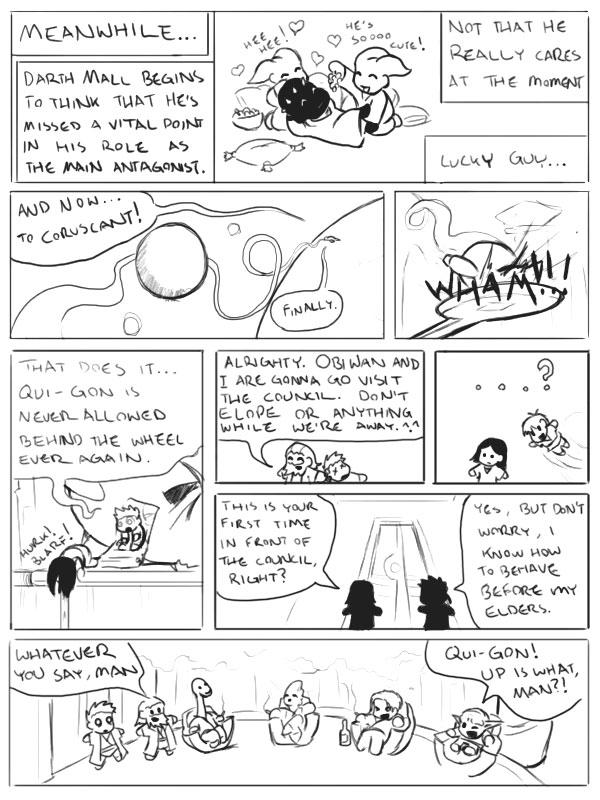 Hopefully, this is more readable than earlier installments. I know no one will notice this, but the page was done in photoshop, which accounts for the slight oddness, but at least it's cleaner. Before I was getting pencil smudges and stuff all over the place.

What? You didn't know that the council were just a bunch of junkies? What the hell do you think they do in there all the time, eh?

So is there going to be anymore from this or is this the last comic strip?

Up is what man, lol.

OVER A YEAR D:

Dang. We can't talk unlogged anymore. Sucky new system... On the other hand, this gives me the opportunity to five you and favorite you as you deserve!

Oh mister anonymous, why must you be a faceless person whom no one can see? Wow, yeah, you're all right. (All or just one of you, I'm not sure.) This comic has been lying dusty for way too long. I took a break from it and forgot to tell people, by the time I realized this I was too lazy to bother. The artist apologizes for his sloth-like tendencies. Please forgive me, but this comic might not see an update for a while yet. I'm still busy with projects that have been weighing on my mind as of late. Until then, please watch for more updates as your patience allows. Thank you. ^____^ ~Ronin~

wow... this comic is freaking nice! I LOVE THIS!

I just read though it. extremely hilarious star wars parody. keep up the good work, Ronin. :)

Yay! I finally understand Star Wars now! It's so obvius that the force only works 'cause they're high! And Yoda kicks so much ass in this one.

hey! *waves* just gotten round to reading your comic. LOVE the Mr. Frosty cameo *adds this to faves*

This episode is indeed cleaner and easier to read than some of the other ones... nice work :)

Randal: I'm still trying to sort my life out a bit, so it might be a while since my last update. As for how I came about this idea, it was something I thought up while being bored at work. It sort of escalated to another webcomic of horrors. Everyone else: I love you still. Stay tuned for more.

Ah, great job, but to make up for my lack of avatar I'm saying anonymous, oo0o00o0o0o00o

it's been a while since you've updated, ronin. Surely there's more fun to poke at the starwars universe. Were those starwars toys for tykes your inspiration for this? I want to get some of those for my kid. they look hillarious.

what's that council member next to yoda drinking? looks like it's got him loungin. this comic is a well executed pretty good idea. good to see someone still owns a pencil.

wow this is cute

ooooookayy... I can't seem to pull out the funny this week, so I'm going to have to postpone it until next week. So sorry everyone. ;_;