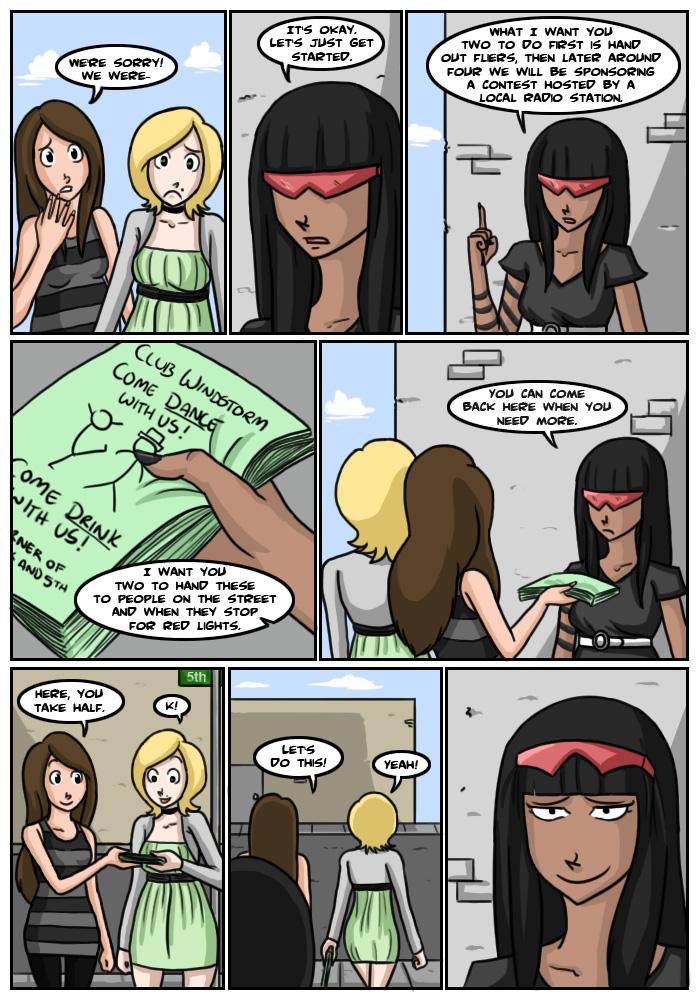 As promised an 8 page update on Monday! This marks the start of a new trial update system where I will update 8 pages every 2 weeks. If I can't keep it up though, I'll just slow back down and go back to a slower update schedule. Still I'd like to give it a shot.

I tried to see if I could do 8 pages in 1 week and it worked! It was also really difficult, so hopefully 2 weeks will be easier and more maintainable.

And thank you so much for all the nice comments in the past few days! They have really made me feel fantastic, and they helped motivate me a ton. I can't thank you guys enough for reading. So welcome new readers, I'll try my best to make something you guys can enjoy.

EDIT
@Chernobog, Thanks for the catch about the compensation! That totally slipped my mind, so I went back and edited it.

Dawh, this comic is still so cute :)

I love this, it's refreshing and original; completely new concept that I can't wait to see where it turns up.

(sorry for my previous post, DD cut it off :|) Alex is a transgender, so she is a girl in a guy's body? Are her boobs real then? Does Raylan know about Alex being transgender?

She ... smiles? It is hereby proven: The two Real Girls are cuter than puppies.

I just started reading this and I'm hooked. :) Keep up the good work!

I like reading it in big updates C: Keep up the great work!

Possible funny turn of events: Lina has a crush on Alex and is weirded out that she is trans-gender. That's at least what the last panel seems to maybe be implying to me...

Lina' probably not a "girl" in the conventionel sense, too.

Quite a few updates lol

Nice job on every page of this mass update! You know, alex is pretty cute, and it's really easy to forget that he's actually a guy. It kind of makes me wonder what I would do if a girl I cared about turned out to not actually be a girl. I'm too rational to be angry about it and too accepting to be wierded out. I guess I would probably try to break the relationship off on good terms, although you never know, I might still like them enough to overlook it. Crap, everything I thought I knew about my sexual orientation just flew out the window. Of course, real transgender people rarely are so lucky as Alex in their ability to appear to be the opposite gender, so this scenario will almost certainly never play out.

glad you made it to 8 pages update! just don't push yourself too hard for our selfish demands of an update :D lolz :d

I think I'm going to like Lina. Her tattoo is pretty sweet, too.

I want one of those fliers! lol, Dancing stick figures are awesome!

Just make sure you don't burn your self out when making your comics. I would hate to see this one just vanish.

Wow, she CAN crack a smile. Not sure how they're at all late, but hey. I hope they don't get nailed with that 'we never talked about compensation' aspect. Anyway, good on ya for doing such a big update!