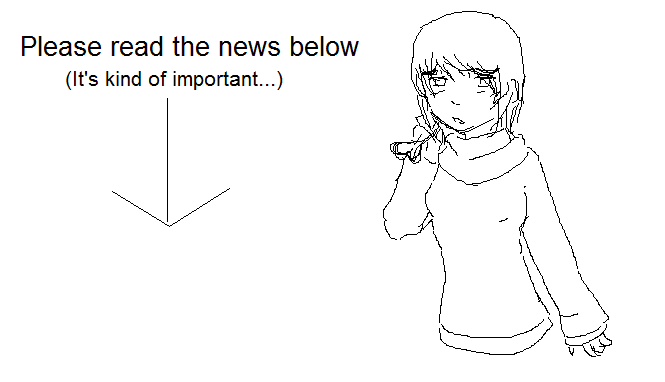 I'm really sorry to do this to you guys, and so soon in the comic as well… No, it's not that I've forgotten about it, and I'm certainly not stopping it, but I need to let you know exactly why there haven't been updates (if anyone still checks back to read this…). I'm not sure if I had mentioned this before, but my grandfather had cancer… something that started in the colon and metastasized throughout his entire body. Tumours were showing up everywhere and nothing was helping. Around September, his health started become worse and as I was his primary caregiver, it meant I had to pick up the slack more from taking a taxi to get groceries to making sure to be ready to call for emergency help at the drop of a hat. Then, in January, my cat tripped him as he was going to use the bathroom and he broke his hip. He lasted for what was a long and painful month for him after that while we tried to push to get him into a retirement home as his care was now well beyond my abilities. On February 5th, he closed his eyes for the last time after my mother told him it was okay for him to go now. I have shouldered a lot over the past year and a half in taking care of him, and because of abuses I have suffered in a great amount through my past I had developed Post Traumatic Stress Disorder which led to severe anxiety and depression… As you can imagine, this has been a very difficult time for me, especially with being completely alone in a fair-sized home when I'd been so used to having someone around. At the moment, I'm simply acting as the caretaker to make sure everything is in order for sale, and to help keep the insurance rates down so that it doesn't become too expensive for my family. If the house is sold soon, I should be able to move to the new place I have set up with my aunt further up North within a couple of weeks. I'm worn out, mentally and physically and am in desperate need of recovery. I can't even remember the last time I was able to relax. At least with this move, I'll finally be able to get a paying job and hopefully push my healing process and cut loose the ghosts of the past that continue to haunt me. In the mean-time, the comic is on hold indefinitely while I get things in order. I promise to start again as soon as I'm able to, but I really need to think about my health at the moment, especially with currently awaiting test results to make sure I haven't inherited my mother's epilepsy. Of course, I can't just leave you with bad news alone… I have recently found out from my younger sister that she is pregnant, so I will be an auntie come autumn. And another little tidbit… I have an original comic in the planning stages that I will be putting on the internet at some point. I'm currently working out the script for it, though I know exactly how the story-line will go so it shouldn't take too long for that. I'll definitely post the link once I've got it prepared. Hopefully the next time you guys hear from me I'll be doing far better and have a lot more good news to share. I sincerely apologize for this and I hope you'll understand.

UPDATE PLEASE!!! i just began reading this comic and its really good!

It's okay. I can see that you passed trough a lot by reading your comment. I was wondering what happened actually so... My best wishes for you.