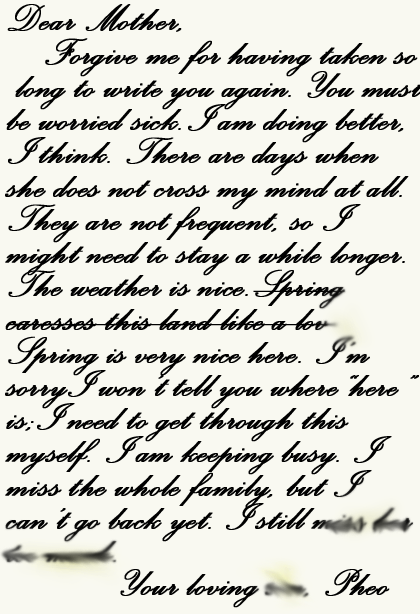 Prologue: a letter to home

Hi there! I hope you remember me from my previous works, Long as it Matters and Good Riddance! Or, considering my track record, I kinda hope you don't. Point is, welcome to Second Chances, a story of fae, love, and stuff!

This story's been around for a long, long time. I have about 75+ pages of it in novel form in one way or another lying around, and pictures of its characters, particularly Satu, who you'll meet in a while, from long, long ago. possibly febuary of 2003, when it was originally done as a roleplay between a friend of mine (the creator or Louis and Virote, for those of you keeping track) and I. To keep some of the conflicts that happened in my head with Good Riddance from happening again, as well as because he just didn't fit the plot anymore(he didn't. in the final time I tried it as a novel, he was going to be completely cut.), her character has been removed, and has been returned to her drawers of spare characters.

This same friend was the one who described what I'm doing right now – opening it up with a letter – as “pulling a Mary Shelley.” I'm sorry there are no pictures. I wanted to hint at things before the story began. Pheo's one of them, actually. The name for him was originally “Nyx,” but it was changed at the last minute. His identity comes out much later in the story. as for the smudges…I just had to add them when I had a mental image of Pheo writing the letter, starting to cry, and trying to wipe off the tears, just making everything worse.

^^ Ee! Comic. I like the idea of the smudges. It adds character. Also, Pheo uses semi-colons. I love him as of now.