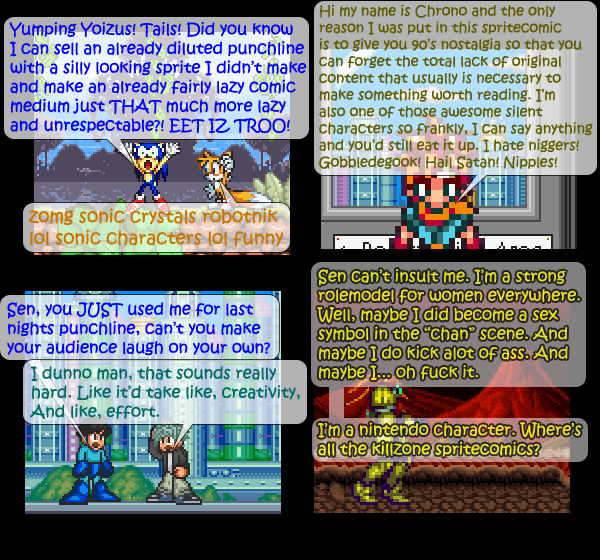 A thinly-veiled stab at all the damn comic's who put in the time and effort to learn photoshop, update everyday, buy a domain name for your website but can't even attempt to make your own sprites.

And to tell the truth, I respect people that use MSpaint and recolors more than I respect any big-name that has a 1000 fans and a blog thats read and dissected by my cult on a daily basis.

Ok maybe I would really like to be one of those guys.
But at the same time I want to earn that position.
Not have it handed to me with a ton of photoshop flare and characters that I stole from Nintendo.

Or in the least, New fucking genre's! Every SINGLE time I log onto drunkduck and comment on all the most recently updated spritecomics, I'm commenting on sonic, mario, zelda or at best another metroid comic. Usually brainmelting combinations of all of the above, with dragonball Z characters splattered in for "good" measure. Is it too much to ask to see someone making horrible guilty gear fancomics? Or Marvel VS Capcom? Maybe a Dungeons & Dragons spoof with "Knights of the Round Table" characters? I can think of a million jokes for these and I can think of these in a few minutes. So the amount of effort, or lack thereof, put into spewing out this pixellated garbage I so oft' see, is truly shocking. I... fuck it. Back to commenting on all this trash. =/ Then I'll update shadowrun and show everyone how a real spritecomic looks like again.

Yeah we need more ingenious or just genius sprite comics other than the same old crap. I'm gonna start out on a new sprite comic involving Sonic, a bunch of dark edged fan characters that are totally NOT stolen from other comics, and some yaoi sub-plot. It'll be the greatest comic ever!