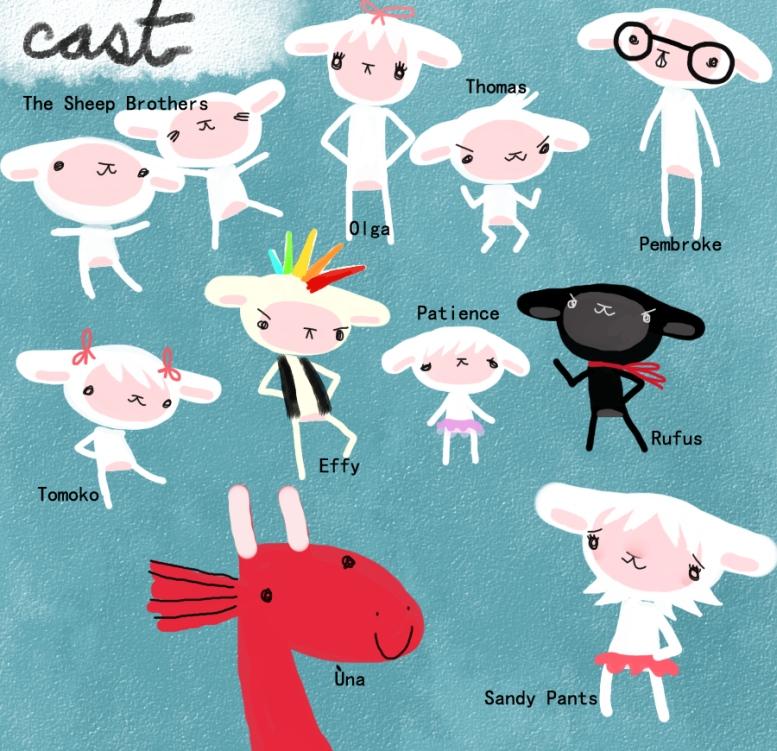 This took a lot of work mostly because I had to think up names for some of them that I have not named yet.

THE SHEEP GANG! These guys all hang together at the same place. They are part of a group of lambs that need babysitting until their parents can come pick them up. They have dubbed themselves a “gang” since they are all friends and like to stick together. The place they stay at is called “Sheepling House.”

The Sheep Brothers:
These are two lambs named Sheep. They are mischievous, playful, and sometimes helpful. You will see them a lot, but you can never tell them apart! Even their own parents have given up and they are treated like one entity. They like it this way though.

Olga:
Bossy, opinionated, and loves to tease. Olga is second oldest so she likes to think of herself as being in charge. She's not though, and still needs a babysitter just like everyone else. Left on her own she would cause a disaster, but with the other lambs her destructive force is held back.

Thomas:
The rudest kid around the block! Thomas likes to cause trouble. He lies, steals, and cusses. His bad behavior sometimes rubs off on The Sheep Brothers. Unlike them he never has regrets or shame. When he acts up he does it deliberately and is not sorry for his actions. Deep down he just wants attention. The other lambs have learned to ignore him when he's rude and that makes him behave… for a minute.

Pembroke:
Pembroke is very smart and self-reliant, but sometimes his inventions don't work so well. He has blown himself up several times but only once did he need a doctor. After his fifth explosion incident his parents decided that he go to the Sheepling House for afterschool babysitting. His dream is to one day make an invention that is actually useful. He is scared of the dark.

Tomoko:
She is far from the oldest but she's clearly the most mature of all the lambs. If anything happened to the babysitter Tomoko would kindly step in place to make sure everyone was safe and cared for. She is wise beyond her years. Sometimes it embarrasses the older children when Tomoko helps or guides them. She knows this, but does not rub their noses in it. She's not like Olga. She knows that the best way to guide others is with kindness and understanding. That's especially true when it comes to the case of Effy, someone she sees as an unofficial older brother.

Effy:
Effy likes to think he's hardcore and “one bad dude” but he clearly isn't. He is perhaps the most childish of all the lambs. He throws tantrums, sucks his thumb, and still wets his bed well into his teens. No one knows about his bedwetting but Tomoko, and she has kept his secret and even helped him change his sheets so no one else would have to know. Effy tries to hide his feelings for Tomoko but he loves her just like a brother. He's too afraid to show his emotions, but deep down Tomoko knows he loves her and she loves him back. He's not stupid. He's just very immature. People have taken to calling him Effy because his full name is F**kup.

Patience:
She's a slow kid, but sweet. She has some personality quirks that make her a little unpredictable. She wants to be a ballerina. Dancing is a form of meditation for her, and it's the only time she doesn't freak out.

Rufus:
The coolest cat around. Everyone in The Sheepling House looks up to Rufus for advice on how to be cool. Rufus decided to wear a red bow one day so that he could stand out in a crowd.

Ãƒâ„¢na:
A dragon from a far off land. His parents thought he was going to be a girl so they named him Ãƒâ„¢na before he was born. They never changed it. He's still a child, but he's very large for his age since he's a dragon. He is friends with the lambs and often likes to play with them. He has to hide this from the other dragons because he knows they'd tease him about it. His name, coincidently, means “lamb.”

Sandy Pants:
The resident den mother to all the little lambs. She is the one who runs the Sheepling House and cares for everyone. She isn't seen often but she does see everything that the kids do and records it in her record books.

It's like a crazy sheep version of Katamari Damacy! Love it!

Those are so cute I want to hug them.