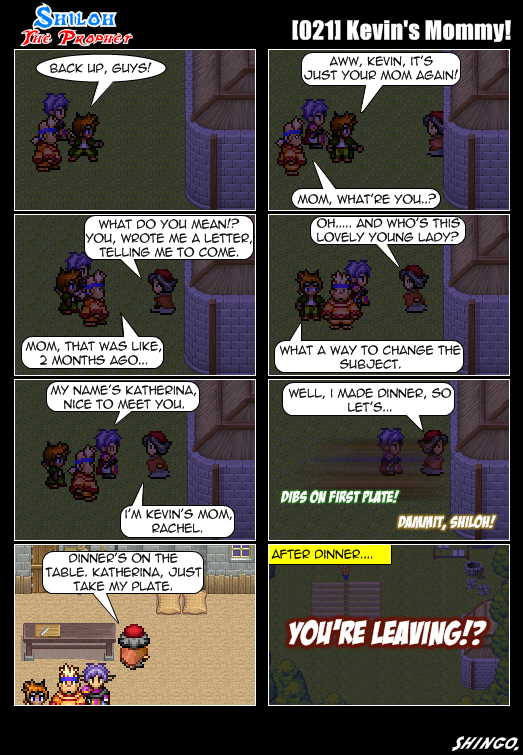 I actually have a really good reason why I haven't been updating, and you probably won't believe me. Well, you see, the thing is… I have another comic. I also happen to be a certain panda you may know, love, worship, or secretly despise.

Sorry for not updating in so long, but if you read PLV, you should notice why. Updates for this will start appearing more often now.

Sorry to disappoint you poon, but this comic has been dead for over a year. A bit too late to face it now.

You are worse than spritescape XD You should start drawing these full time and then go from where you left off!

I know that, but the thing is...couldn't he just start drawing this too like he originaly planned?

I commented before he started on TBAPA! No fair!

Jaffy, you of all people should know he gave up on Spriting >_>

Dude, you could possibly be worse than Spritescape...

you've almost hit the whole month without updating mark... AGAIN!!! C'mon, I used to look forward to this, but now I'm just getting bored.

It's funny, I stated this to kev like, a week ago on AIM XD. You realy blew it be having the same first name for shingo...

I'm not saying I didn't get any clues either...but...yeah.

I think it was pretty obvious... you both have the same style and all that... but I at first thought you were rivals not the same person lol =O

...Wow...I've never read this comic, And I've only just seen Pokemon legacy version, And I thought That was amazing...And this? It must be good if your kinu-panda!

Look for them at Bob and George, those were what I was referring to.