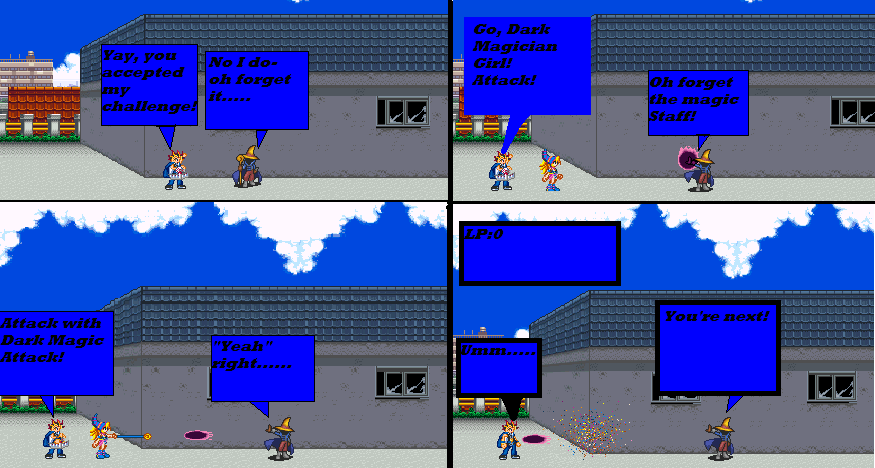 I know the Text box is different from each othor and the tail because they keep on changing and I wasn't working on them for one day.And I know the last 2 panels are bigger than the bottom.What a mess :(

uhhh, Are you dead ore somethin?

Five! (and I made new comic)

What did you do?

I can't update my account's frozen! Have to wait 14 DAYS!

Don't sweat the criticisms that much, but for the love of god, UPDATE!!!!!

The crappy mspaint explosion brings this down a point.

YAY! I've waited forever for this to happen to that weird-haired freak!

Heh, should have used the Black Lustre Soldier.

serius you stright up suck communist you talk bad about everones comic but your on crappy comics. Any way nice start of i think its nice cause i hate yugioh. Sorry about long comment.

I know it's you Communist(i'm 90%You said that because so you can have an excuse for not giving a 1 for no reason. Oh and It's crappy effects, if you ever saw the show it does that when a monster is destroyed. Why am I responding to you.May because you're so obnoxious.

he warned him that gives him every right, it's in the law I believe

Erase the lines between the text bubbles and tails and it'll be fine.

tsk tsk Yugi should have used a trap card