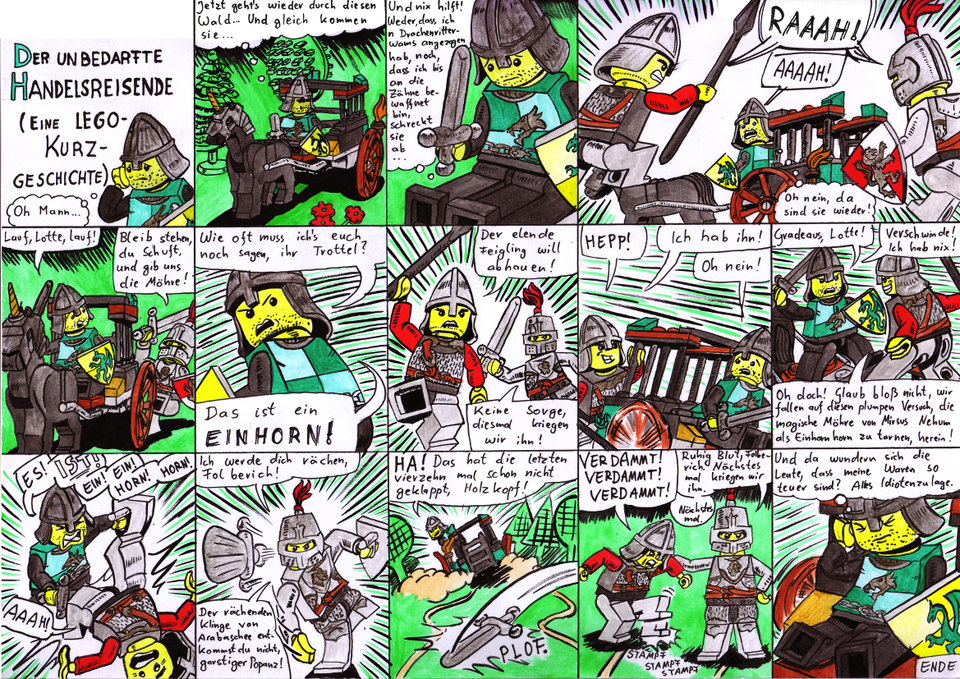 Lotte is an old-fashioned German name. Mirsus Nehum is a corruption of Mir-Susne-Hum/Мир-Суснэ-хум, a deity of the Ob-Ugrians. He's the mediator between the gods and the humans, because his father Numi-Torem doesn't care about humans. The other names I made up.

Too bad in the English translation the structure of ein Einhornhorn ‘a unicorn horn’ can't be preserved, because in English the numeral one and the indefinite article a aren't identical like in German and unicorn is a Latin loanword, which translates to ‘one horn’, which is also the meaning of the German Einhorn. On the other hand, in the English translation I could add another pun: green (in the sense of ‘clueless, naive, inexperienced’) as a translation for unbedarft, because his clothing is green, y'see.

p2
CT: Going through this forest again… And they're about to attack…

p3
CT: And nothing works! Neither that I'm dressed up like a Dragon Knight, nor that I'm armed to the teeth does deter them…

p9
CT: Straight forward, Lotte! // Get lost! I don't have anything!
L1: You do! Don't think we're falling for your clumsy attempt to disguise the magical Carrot of Mirsus Nehum as a unicorn horn!

p11
L2: I shall avenge you, Folberich! // You shan't escape the Avenging Blade of Arabaschee, bloody bugbear!

p14
CT: And people are wondering why my goods are so expensive. It's all idiot's weighing.
Box: THE END