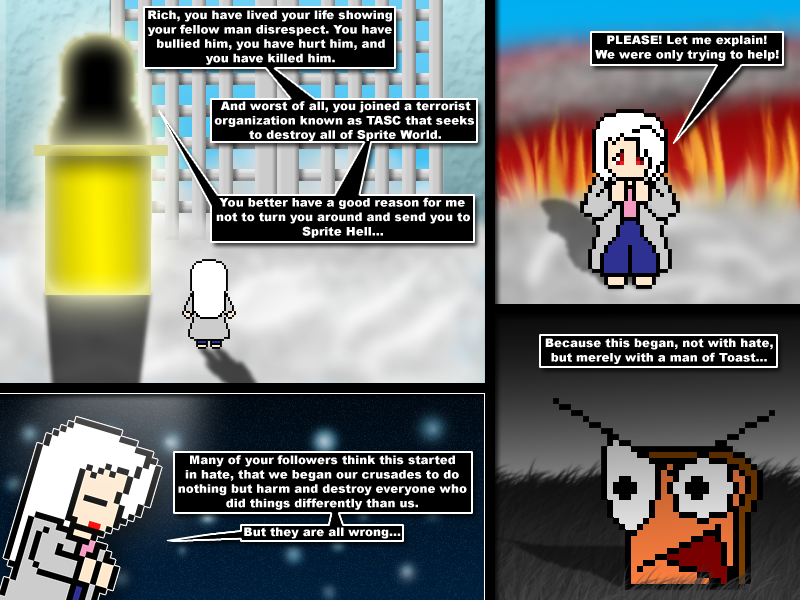 This page was done by Rich from EVERYTHING MUST DIE!. The next page will be done by Lefarce from Le Farce.

Sorry about the delay and removal. I wanted to hype it a bit, and at the same time, accumulate some issues. I was waiting till we got 10, but people kept saying we were pulling a prank on the forums... well, we aren't, and if you want to head on over and get a glimpse of the issues to come, your more then welcome! Thanks for the support! We hope to see you guys around on our next update!

Thanks for all the fives people! The pages only get better after this, so be expecting lots of awesome.

I was starting to this was ever gonna be put up.

yup, I wonder what theyll say about comic 3, (the one i did)

...man there's gonna be such a flaming once this reaches teh asshats.

They're Rich's. This is a collab project, so each page will look slightly to drastically different from the last.

The forum is still up and running, for all of those that don't know. www.b-host.net/1/ASC/forums But please, if you join, don't be an idiot. I'm not singling anyone out, it's just that we've had our share of morons come on ;).

w00t! A place for TASC members, like myself, to go for a breather!

the funy thing is this is almost a true story...