The Adventures of Superchum and the Mighty Befrienders 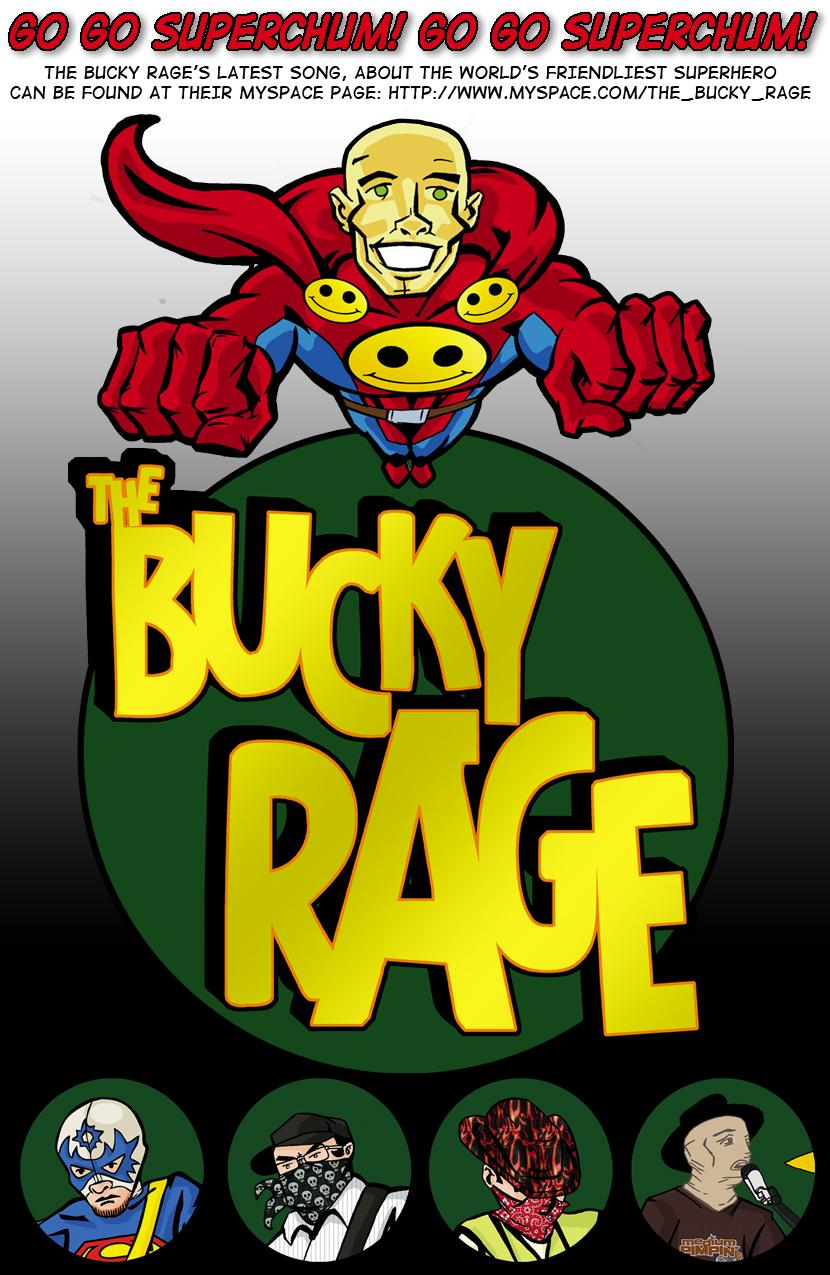 Super has his own Theme Song!

Comic production was shockingly halted this week, because some of Superchum's best friends in Scotland gave him the coolest gift of all-time: HIS VERY OWN THEME SONG!

So this week I'm pausing a moment to give them the applause and credit they deserve for such an amazing gift. The band is called The Bucky Rage. You can hear their Superchum theme song (and more examples of their artistry) on their MySpace page … The Bucky Rage … or if you want you can just click on the Superchum MySpace profile and hear the tune there.

For those wondering how this all came to be …

When I first started to consider bringing Superchum back from his long, long hiatus of not being published, I had not yet discovered Drunk Duck. So I started the comic on MySpace, since I thought the hook of “making friends” on MySpace would be a fun little irony. I try to treat the space like it's Superchum's very own (so I filled out the questions like it was Superchum answering, not me).

But I also got introduced to my friend's co-worker Amanda who was in a band in Philly. And I did some cartoon/design work for them, including a flyer. And that went over so well with them that other bands they knew inquired about me and my services. Including The Bucky Rage out in Glasgow, Scotland. It was one of the cooler projects I ever got to work on for a band, because they perform in masks. They're like their own little super hero team already, so drawing stuff for them was easy and fun. And it's always a thrill to do work for people on the other side of an ocean like that.

They liked the artwork so much and by then I had Superchum back in full force … and had found Drunk Duck at Wizard World Philadelphia, and really kicked things into the next gear … and so Al (the Bucky Rage member in the silver and blue wrestler mask) asked me if I'd like a song.

HELL YEAH I WOULD. Who would refuse a song? A song about my comic! The shoe was on the other foot now. This whole process has shown me exactly why the people I work with get excited about the work I do for them. I'm drawing them and people think that's so amazing. I sometimes don't quite connect to it because drawing is just what I do. It's a little bit more difficult than breathing or talking, but it's still, for me a natural extension of myself. So I don't always see it the way the people I draw see it. But The Bucky Rage really helped me see, because now I was the one receiving a song about my own character and my own work.

Anyways, sorry to ramble. I'm just that excited about this. So if you get a chance, click one of the links and give it a listen. It's a fast paced song. It's only a minute and forty seconds long. And it's got sort of a punk feel, but still very very reminiscent of an old 70s cartoon theme song. In short, it's perfect! If I ever take Superchum to a more interactive level (like say a flash animated feature) … I now have my opening theme song.

The regularly scheduled comic shall return in 7 days time. Though I'll still be humming this tune in my head for years to come.

Almost two and a half years without Superchum!

...I want one too... lol. Anyway, that's awesome, man, that your character has his own theme song. My main superhero SuperMilo has a MySpace page for the same reasons: advertisement but as if he were real and really blogging it. Does Superchum still have his? That'd be awesome to add you/Superchum as a friend.

Aw man, more than one year without Superchum...

Nice. Your own theme song. Good way to get inspired in the morning, eh?

I unbelievably cool is that!!!! what a gift! congrats to you. that would be so cool to receive.

Sex for the ears.

that is freaking awesome!