The Ghosts Of You 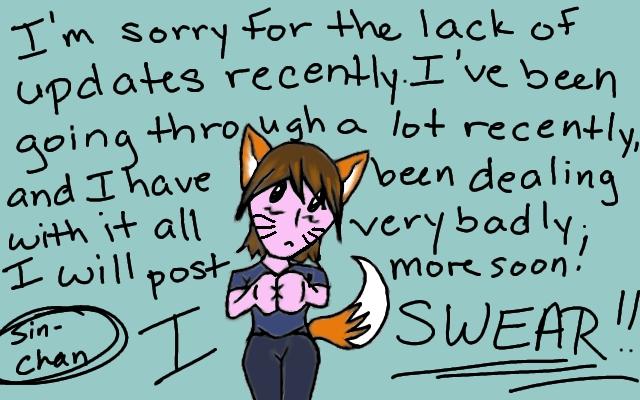 Like the picture says, I've been going through a Hell of a lot of stuff. Mostly, I've been having a bout with depression, and- like mentioned- I haven't been dealing with it all that well. Most of the time, I've been sitting in my room refusing to leave unless I had to go to work. It wasn't the most healthy of things to do. The goods news- I'm forcing myself into actually working now, which I think means that I am slowly but surely digging my way out from my deep hole of depression. I'm ever hopeful I am at least. Depression sucks, if you didn't know.

Anyway… I'm trying so hard not to start other things right now. I've had so many good ideas recently, but I've been jotting down ideas for another comic- but I swear that I won't upload it online until I have more pages for this. I swear to whatever Gods or Goddesses (or angry little kids with game controllers) that I will uphold that promise.

For as long as I can.

Anyway… I'll try to get another page up in the week (it gives me two days to panic over it), or sooner if I can help it.

It's been ages since you last updated. I hope you are over your bout of depresssion now *hugs*