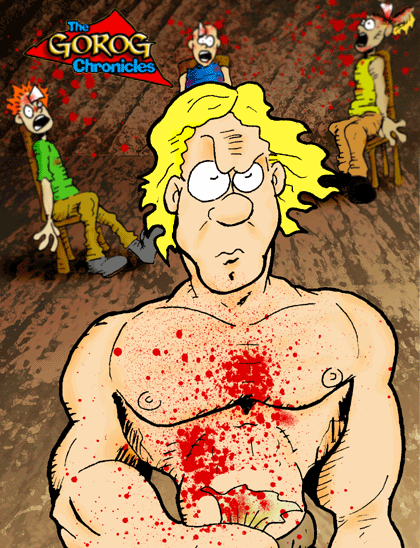 Gorog happened upon a blacksmith in the town of Djul and he was interested in buying the smithÃ¢â‚¬â„¢s newest creation, an axe forged from the femur of the worldÃ¢â‚¬â„¢s last known giant; he imagined this axe would go well with the blackwood dagger he had stolen from a decimated corpse some months earlier. Only thirteen years old and unemployed, Gorog decided the only way to buy the axe was to collect winnings by gambling. He had witnessed his former foster-mother, the witch Ursull, obtain several bags of gold and jewels by winning card games against wandering bards, warriors, and other people of a generally leprous demeanor. He thought the task simple, though he insisted on practice.

For weeks, Gorog spent every waking moment honing his gambling techniques. The sun rose, he awoke, made his daily deposit near a bush beside the cave, ate a few chunks of meat, and then went to work developing his gambling abilities. It was an art form, a precise science, a technique that no one else would be able to defeat. The sun sank behind the horizon and Gorog continued into the night. Three weeks after he began his studies, he emerged from the cave and headed towards the only inn available in the small town of Djul.

Inside, Gorog approached a table of the most despicable card players imaginable. One was a cannibal named Thorm. One was a rapist and murderer named Verjn. And one was a mime known only as Tory. Gorog pulled a seat to the table and told them he wanted to play the ancient card game called Dragon Tooth. Seasoned professionals, the three card players agreed and a pot was arranged. It contained eighty pieces of gold.

Dragon Tooth is a fast game. This game was the fastest. The cards were dealt and before any of the three card players could even begin to organize their hands, Gorog used his weeks of practice to swiftly flick his entire hand of cards at his opponents. He lodged a card in the skull of each gambler; the mimeÃ¢â‚¬â„¢s head was nearly shorn topless. Gorog stood, collected the gold, and walked to the blacksmithÃ¢â‚¬â„¢s shop. He bought the axe and named it Ticklefist.

But that is another story.

I'm really happy with how this one turned out... Funny thing is, I think the entertainer Ricky Jay could actually DO THIS. Don't cross the man.