The Legend of Uncle Billy 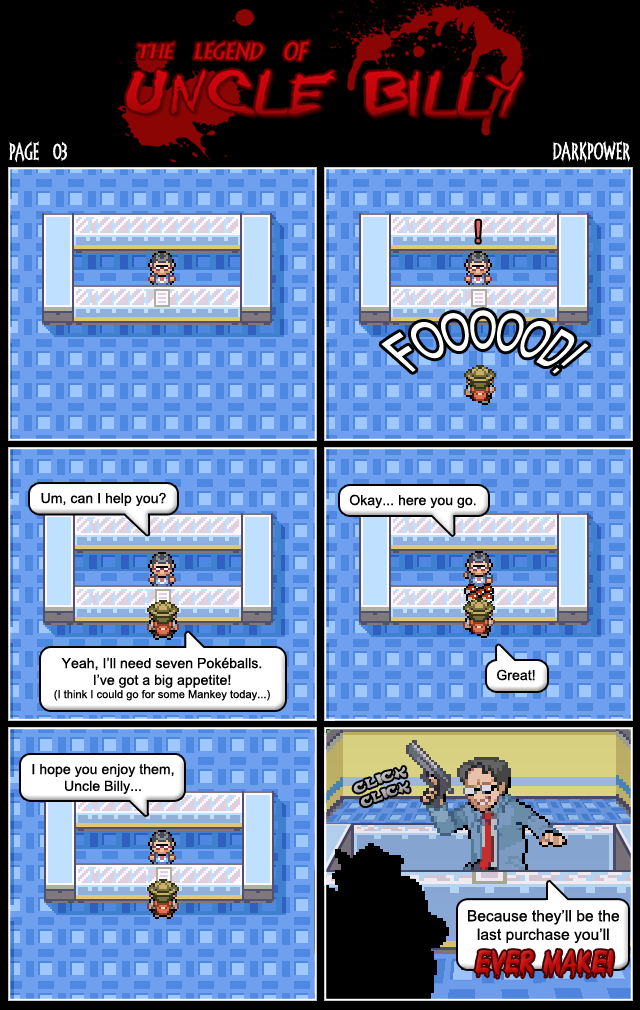 Have you folks read the news today? I was reading a stunning article the other day by a reporter named Ettie. Apparently Uncle Billy has a cousin named Uncle BLAMMO! How cool is that!?

EDIT: Reporter Ettie seems to have mysteriously disappeared and had his comic wiped out of existence. There must be some sort of conspiracy abrewing…

If you have any Uncle Billy tributes you're working on, don't hesitate to send them to me! I'll immortalize them forever with a big fat link to your comic. I will also possibly steal them, but that's just an added bonus!

THIS TYPO IS AN ILLUSION AND IS A TRAP DEVISUT BY SATAN. GO AHEAD DAUNTLESSLY! MAKE RAPID PROGRES!

There's a typo. "you ever make"? It's "you'll ever make" This comic is too badass too have typos. It needs to be fixed.

Uncle Billy is immune to bullets, you fool!

I am gone for one month, then I come back to a huge craze about a character named "Uncle Billy" fucking LAWLZ faved+

I love the text at the last panel, the red bloody text. Pretty cool.

I don't think I've ever tried the Mankey. Is it any good?

That cashier is my hero.

Remember, Uncle Billy dies 48 Hors ago, but of course, will return.

Ah oh! Everyone run and hide... someone call the police! *Ducks*

that and he's the main character... without him there is no comic

HE'S GOT A GUN!!!! How will Uncle Billy get himself out of this one? D8

lol, first gun to be in the game.

A gun! You don't see that in many Pokemon comics.

The last panel is really awesome. Especially with the 3D look.