The New Life and Maybe Death of Ed 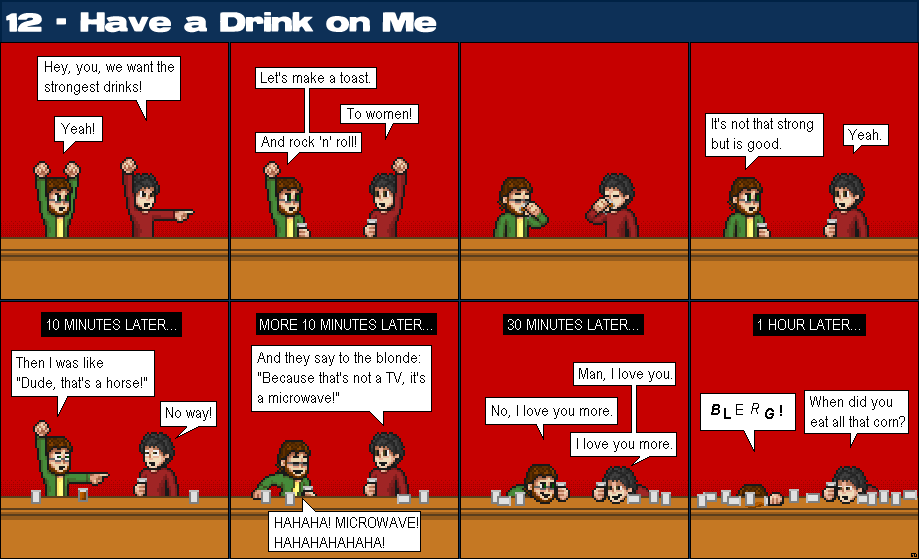 Ah… the good old first Adventures in the Bar… I think this page deserves to be made before I end this.

Back in the end of 2009 I said I was going to remake the Life and (Maybe) Death of Ed in a whole new style, but there is one problem: things have changed.

I made a foolish choice of creating a story using my friends as my characters. Back then it made sense make a story with them, since most of my inspiration came from them. But now I barely talk to some of them. It's no longer satisfying working on something which source material is not around you anymore. It's actually quite sad that I lost contact with some of them…

But I can't deny that I learned a lot from making Life and (Maybe) Death of Ed. It was a good experience to know more about story-telling, sprite comics and pixel art.

What makes me angry is that I left the story in a huge cliffhanger. But in case you are curious, it would end on an story arc related to this feeling: Sarah would move to another neighborhood because of what happened on the cliffhanger, Camila and Rebeca would also move away because they can't stand each other and the other characters would do something along these lines. The last strip would have the same script as the first one, but instead of “Welcome to this comic” it would be “And this is the end of this comic”.

Either way, I would like to thank all the readers who fave'd, commented and enjoyed this strips. Every comment matters (even the blank ones).

But enough of this emo rant.

From now on, Blue Strawberry will be my ultra-main project. I believe I'm using my full potential on it. And I definitely need to continue working on Cirius…

So go read Blue Strawberry to have a good time.