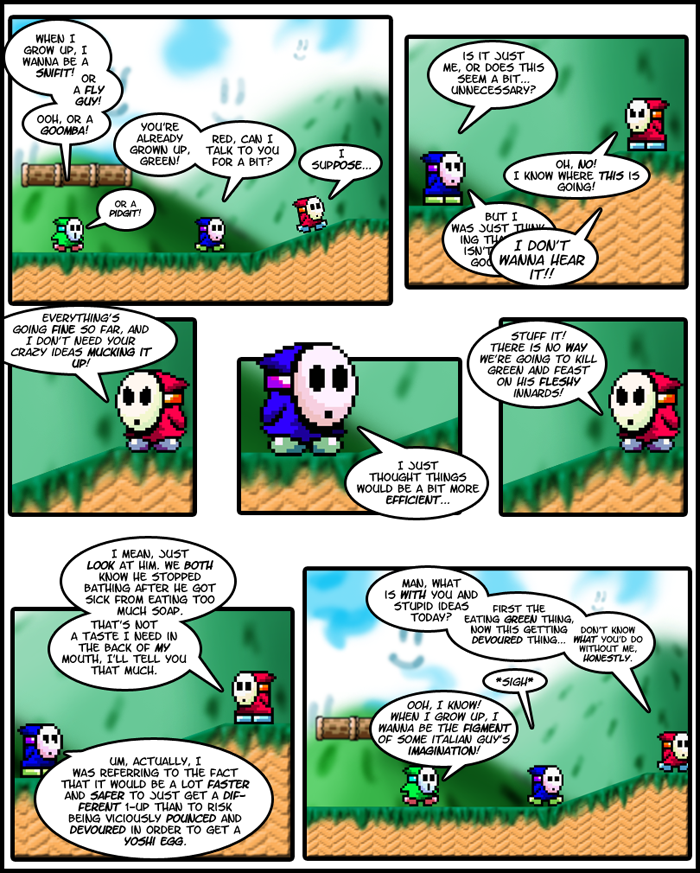 I'm worried that Green's dialogue in this is going to be too much of a gaming in-joke for casual audiences (one of the banes of sprite comics, or so I've been told).

Speaking of problems with sprite comics, today we're going to talk about bit-mixing. I'm not sure if that's the “official term”, but basically what I mean is using two sprites of different resolution. The problem with this is that, if done poorly, the two sprites will clash, and whichever one the reader is more familiar with will seem “real”, while the opposing character will look like a cardboard cutout of itself. I know a lot of people like to make sprite comics as a way of combining some of their favorite games, but I'm afraid it just doesn't work in their favor. So far I haven't found any real tricks to blending clashing characters like this, and the best recommendation I can give is to avoid mixing sprites randomly. There are some games that are similar enough, graphically, to allow this kind of mixing, but those are few and far between.

Hey, that would be a pretty spiffy grown-up occupation...

Heh... sprite mixing... the one thing that my comic is all about... I do get what you're saying , though... which is why I try to only use Gameboy Advance sprites without mixing in other stuff that might be a bit more detailed. The idea never was the best in the world from the start, but I tr to keep it going as best I can, y'know?

I relate to Green, I honestly wanted to be one of those red birds that dropped bombs from SMB2 when I was younger. Love the comic, still the best sprite comic on the duck hands down.

I think it depends on the obscurity of the joke. I was afraid to use the figment line, because it doesn't really make sense to anyone who hasn't beaten Mario Bros. 2. I think one would need a rudimentary knowledge of the Mario world in order to decide to read this comic in the first place, but I don't want to alienate any readers who only have a passing familiarity with it.

I don't get why a gaming in joke would be bad. I mean, that would make perfect sense in a sprite comic, at least to me. The whole point of a comic is to tell a story, if your using the setting, why not have in jokes? Especially if it's a good one like this one.

I love this sprite comic. It has a plot that's actually been thought about.... Nice comedy.... And I love the backgrounds. It looks like you've made them softer tones so the sprites stick out. I really like that. I also like the variation in panel sizes. All in all, this is a very nice comic.

"Or a Pidget" has to be the best line ever.