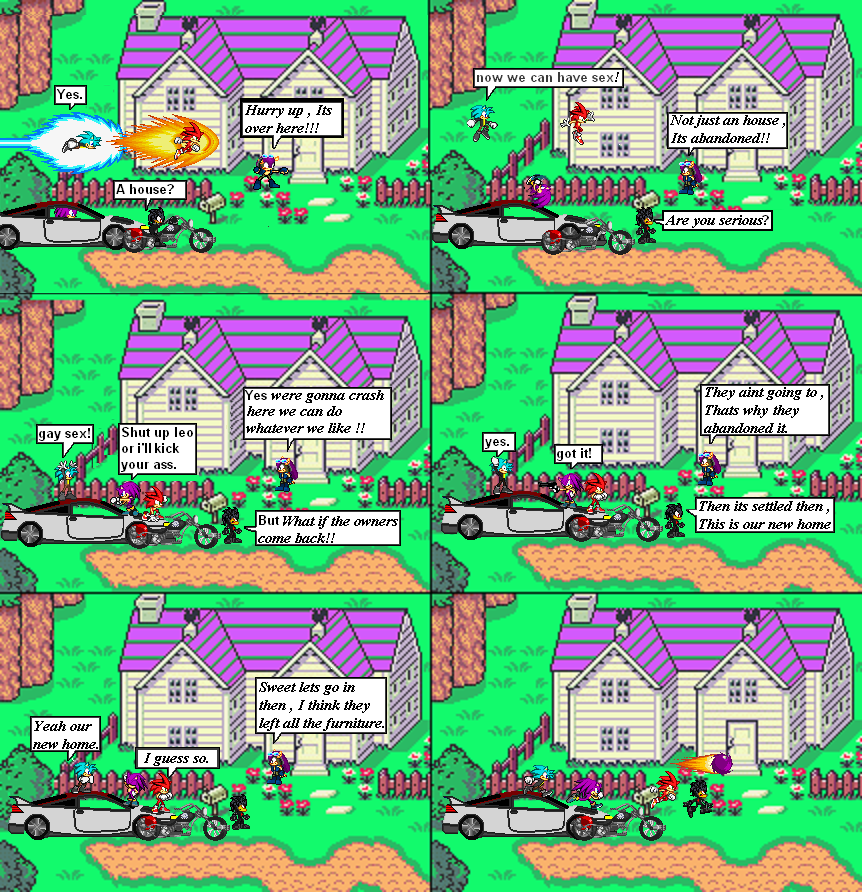 you can all fuck off

[quote][/quote]Kevin Said: Now... If you were to, I don't know, STOP COMMENTING, he most likely would quite. This is obviously one of those der anti-spriters. Your comments are just fodder for them.

Dude get permission and dont make the sprites gay you thief. Theres a thing called a life use it!

Quacklin:you haven't read the stuff we said on the last page have you?

Lets see, most people could get my sprites from that first comic I made, but that asshole who seems to be using the real old sprites most be trying to fuck with the wrong people, see I may have made various enemys when I was just getting started on DD, but I made friends with most of them, but hes going to get banned or something cause he never get any of our permission, the big question is howed he get Manio's sprites?? Also, I believe it was clear that Quacklin has a girlfriend.

You guys do post them in comments. And at forums. Really not that hard...

Im still wondering how the hell he got ALL of our sheets.

@ Everyone: Guys! I think this guy just wants "[b]attention[/b]", so if we stop commenting he'll go away or he just wants to bug us, so we just stop commenting :D @ xman: I don't think you'll get anywhere with Flame's sprite if he only has one pose >.>

well im not gonna rate like aeweople said that he is probaly so guy who draws comics and made a fake account and is doing this just to tease use cause he must know the law (or just did it for no reason) so really we cant do jack so we might as well just ignore him till eventually he stops and gets bored...thats what we should do but we still comment its just like feeding a fire

[quote=Kevin]Now... If you were to, I don't know, STOP COMMENTING, he most likely would quite. This is obviously one of those der anti-spriters. Your comments are just fodder for them.[/quote] [quote=Kyle]Once again guys if you stop commenting him eventually he will stop posting and he'll go away[/quote]

Dude, What the fuck?! Kevin, they maybe reolour's, and the admins wont give a fuck, still does'nt mean he has the right todo it, xman is pratically making fun of *insert the stolen spriter's owner here*, and plus, they're maybe the law of, freedom of speech and freedom of print but there is also times where it cut's the lines on those law's... Xman, if you think it's right to steal sprite's, make fun of that persons sprite qhich was either ripped or stolen from, I think your the lowest piece of shit on thee earth. I wont make total verbal attack's, but i will tell you what you are... A THIEF!!!

Yo I'm 9 I'm not to suppost too know this until i'm in the 6th grade!(But I do know it achully but still.) I HATE YOU FOR STEALING MY FREINDS SPRITES AND CALLING THEM GAY ASSES!! I'M NOT EVEN GONIG TO RATE THIS!!

its sad it seems both of you don't have any creativity. your just dull. it's sad. I try coming on here to find people with some talent....but when I see this it makes people on this website look like fools. So tell me why do you think you should do this? you better give me a good resion.

Haha. I wouldn't even waste my time doing that ;P [url=http://i5.photobucket.com/albums/y164/CheatCodeBusters/ffffoooonnnnt.jpg]I'm trying to make a font right now, anyway.[/url] Actually, I'm trying to point out how everyone was all [url=http://www.drunkduck.com/community/view_topic.php?tid=27768&cid=228]"Kevin be admin! He cool! yadada!" at the forums, but now no one will listen to me.[/url] Now... If you were to, I don't know, STOP COMMENTING, he most likely would quite. This is obviously one of those der anti-spriters. Your comments are just fodder for them. Oh and, hey, SmackJeeves is up. Let me go grab that URL real quick like..