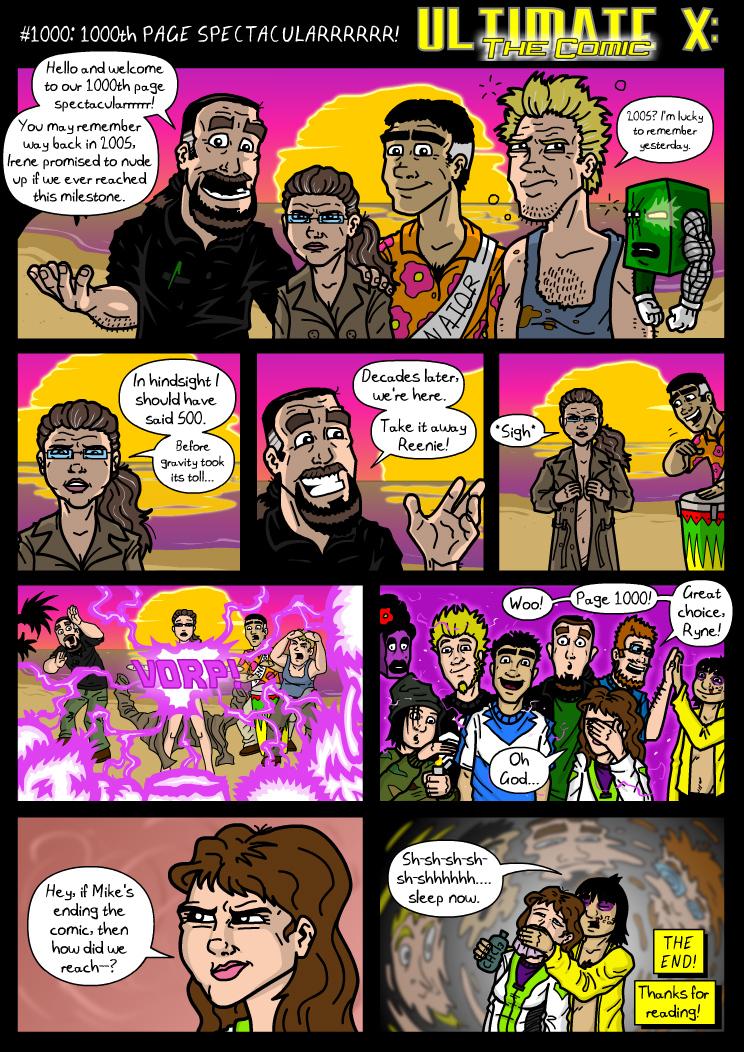 There it is. The final Ultimate X. Hope it was worth the wait!

When I started Ultimate X I was 19. This time next week I'm going to be 24. I'm going to spend the next four and a bit years trying to think of a way to end that thought with something profound and meaningful.

I want to thank everyone who's ever read our comic, and raise a middle finger to those who haven't. Nah, just kidding, you guys'll come around one day. I'd also like to thank my co-writers / co-stars - Brooks, Dez, Irene, Rob and Ryne for all the help they've give me over the years. And one last thanks to skoolmunkee for last week's news post in which she referred to us as much-loved. Awwww. Made my day.

Now, at the risk of getting all sentimental (damn it Rob, stop crying), moving on to other things…

A couple of days ago Drunk Duck's very own Locoma sent me some fanart as a parting gift, so I thought I'd share it with you guys here. Thanks Mr Monk. You rock!

Stay tuned for news on the second volume of our book. You can still pick up the first one here. As an added bonus here's Brooks posing with his copy AND DAMN SHAVEN HAIR SO IT MAKES IT LOOK LIKE I CAN'T DRAW!!! You win this round Brooks…

I really will have far less hair. Thanks to Locoma for the picture Thanks to everyone for reading thanks to Rob, Ryne, Brooks, Irene, Liam, Carla, and most of all Michael well done Lass a special mention to the Original Welshy whom without existing this never would have come about.. What the hell was his name again?

A great run, loved them all. They will be missed. Michael, Farrah and now Ultimate X...

SIGH im changin my avatar in its honor god dammit! FAREWELL UX Hope the 2nd book will be as good as the first one :D

Well at least you ended it thishas been a truly enjoysbul comic just wish I found it before the last few months oh well you are a comidical genous and I will miss this comic but congrates.

Thanks for drawing this just about every week Mike. We know how much effort it took to pump these out. Also a special thanks to Liam, wherever he may be... he threw some great ideas into the comic, but refused to be our little British punchline in it! I'm so sad!!!! Nate Goonie Christopher Askani'son Summers is the shit!! I see a spin off!

Thank you so much for the wonderful comic! *HUG* I will miss reading it... Thank you again for all the time and effort you put into this great comic! It is an end of an era! TT__TT *hugz*

Thank you for all the laughs these past years. It was a good run.

I'm gonna miss this comic something fierce mate, it's always been on my favorites list. I hope you continue to do comics, and if you do, let me know so I can link you on my page. Goodnight, and good luck- J. Rintoul

This comic always made me laugh...Farewell Ultimate X ;(

Sniff.. thanks for the adventure!

Where are the future versions of everybody else?

I'm actually quite sad about this. This comic is going to be very sorely missed.