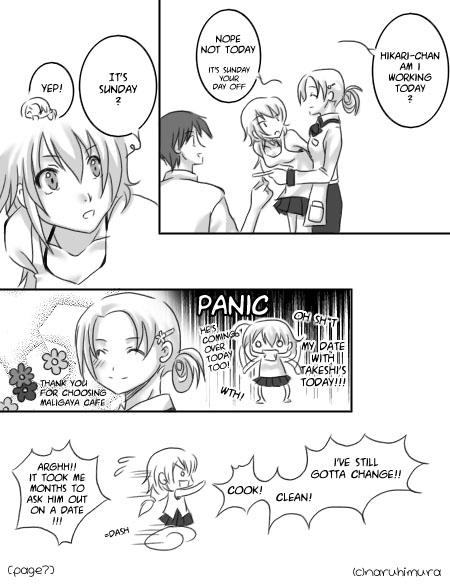 Yarr, wow it took her months to ask out one guy. No WONDER she's still single. haha

Yay for the almost non-tonage aka laziness of it all

*sigh* I wonder when I'll update next…
*gets lazy*

plus I only have 1 page sketched after this one O_o; *sketches out more*

This comic is so cute so far. :D Nice clean art. The layout is wonky for me. ;n; Unless I have to clean my cache or something. I use Firefox so I'm not sure if it looks fine for you if you use Firefox too. *shrugs* @u@;

Definately gona check this site out.

That is really cute that she's so concerned over a guy.

i love ya work, looking forward to seeing more! >.

very nice, I really like it, especially since it seems like the cover page was done by u too.

This is such a cute manga.

pilipino ka rin? coool! i was born in philippines, me still immigrant ahahah!

I've always loved your comics and this looks like another good one. Expecting an update soon!

hhe I REALLY like your art style and tonning, im kinda obsessed with tonning, but your's art and style is so clean and fresh. like... fresh picked apples :d ... or strawberries. ^-^ I like it alot

woww.. this lineart looks amazing, and i like the layout on this page as well, great work ^_^

omg, i'm loving your manga XD you're so talented! (you must have been hearing that often, don't cha? lol ^o^)

=\ Complaining about the names is kinda like saying "ZOMG you used the name 'MIKE!' I totaly saw a movie with a Mike in it! Why'd you take his name??" Anyway... This is looking awesome, Naru-san ^-^

well, i'm sure there are alot of animes/mangas with the same name-ish type things going on lol

*replies to Naru* actually I was thinking of Ayame from Fruits Basket...which is odd because I love Kouga and so does Ayame from Inuyasha. Ha! Ha!

*replies to my_anime_love* ahhh I originally wrote this 4 years ago when I was in an Inuyasha fanmode lol! Ayame you MIGHT be thinking is the same Ayame also from Inuyasha, but I named my character before I knew of Inu Ayame's existance (:

Ok, the person below, 'User: Not logged in', is me. I just signed up. Now I can add this comic to my favorites! Yippie!