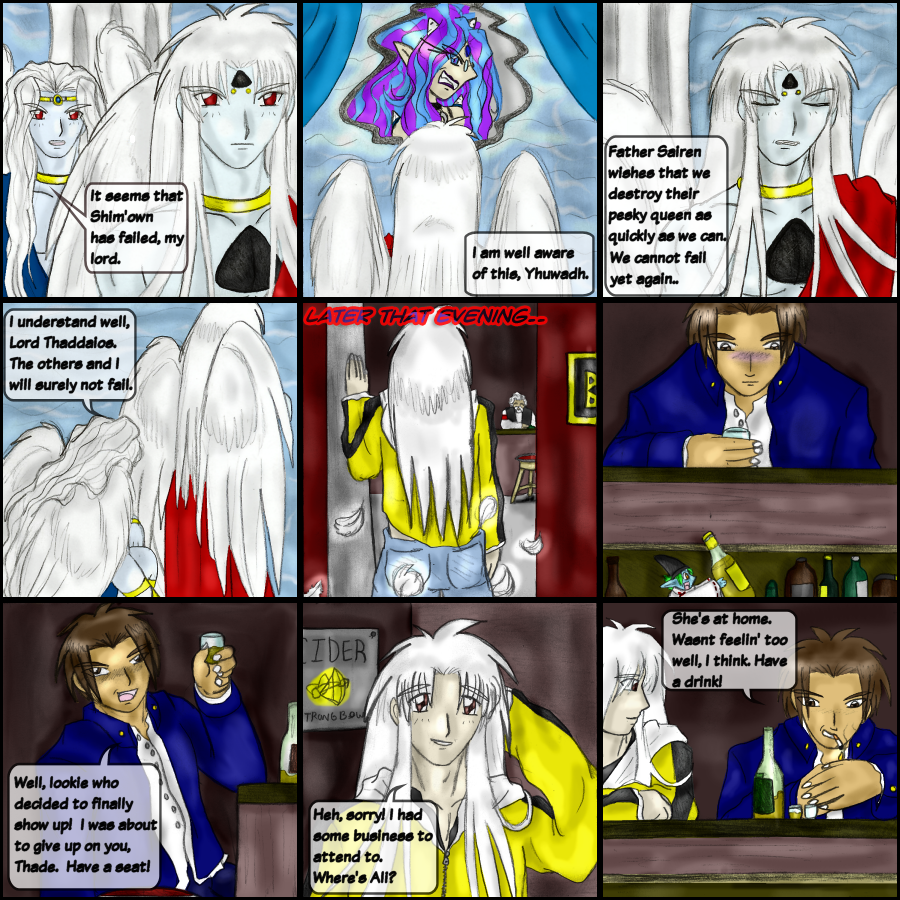 BTW, did I mention this was actually more like a twisted love story?

Enter Hitoshi… the “interest”. He's your average successful young man pushing thirty who just cant shake the feeling that something is not right with the world.
I wonder why? (considering who his best friend is)

Also, one other thing “Sairen” is pronounced “say-wren” not like “siren”..

There's also a reason why the panels look “dirty”. Its because this was not drawn with the intentions of being inked and colored. The “dirty” parts are actually pencil shading since it was originally a pencil comic.

PQ me if somethings really bugging you, or you can add me to MSN instant messenger as oninarou hotmail.com and we'll chat about it one day.

Seems I found this two and a half years too late.

Huh, interesting. I'll have to fave this and see where it goes.

I don't have much to say so far... but i defenetly want to see more. I'm very interested in seeing how far you're going to go with this.

my name isnt Gretchen and you know it ;-p

Listen Gretchen, I've been busy. I haven't even had any time to play my world of warcraft! I'mma smack you Kami!!! Anyways, I'm hoping that I can understand enough of what Kami needs so that I can fufill her every desire... as a grunt O.o In the mean time... I will give you... spam!

In order to continue this comic, I need someone to do the flat colors for me because I dont have the time. Until I can find someone and get some pages colored, this comic is back on hiatus. Obduratus was going to do it, but he disappeared again. PM/email complaints about this to him! ;-p

Wow your colors are alsome. I need alot work in that area. Your character design is very good. I'll keep a eye on this one.

o yeh, and email address is obduratus\gmail.com prolly a much more effective way of getting ahold of me, just make sure that the subject line contains "Warui!" so it doesn;t get sent to spam

heeeee~ Thade and Hito.... heeeeeee~ Slight changes to be made... it shall be discussed :P By the way, my MSN is god(at)lunarblood.com ; feel free to ask storyline questions to me :-) but I won't tell alot... gotta make you pine for it :P

Omg... That's the same person?? Thaddaois looks so different in Enzeru form than he does from a human guise! like whoa... schizophrenia. XD Heehee Obsess is stealing alcohol X3 isn't he too young to be drinking? x3 It's great to see Hitoshi appear in the story after seeing him in the filler!

I have to say each scene is very Beautifully created, as in each area it show great character concepts. Plus I Love little creatures, like the little bar tender..^o^ It's so Cute! I do admire your coloring skills, it does bring out the Enhanced visuals of it's own atmosphere. Lovely page artworks Kaminari,, Best Wishes to you & have a lovely day. ^^ ~M~ v~~~~v