Whats In a Name a DDCW Event 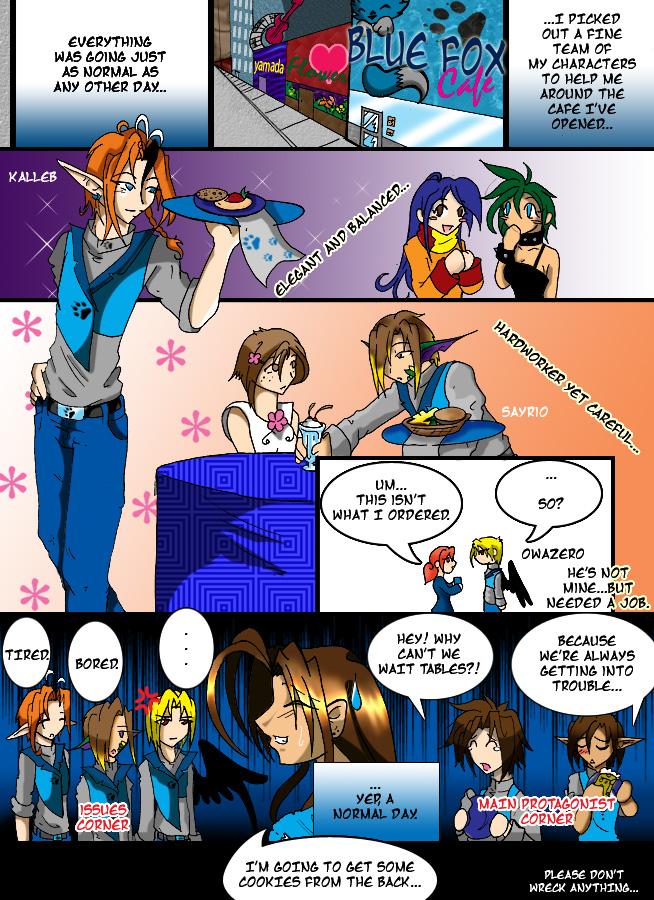 Urg…this page looks yucky to me. Nobody lick it! It might be bad for your health… I don't care if the word cookies is on it…

Yeah, grabbed random male characters that I enjoy drawing. I made sure they were all from different stories…the waiters…

Kalleb and Sayrio's stories aren't being drawn yet…just written. But if any of you read my comic Within Shadows, you'd recognize Rale (First Dishboy). And sneak peak at a future character Owazero! heh heh…

But yes, I don't want those main protagonist to be doing the real work because protagonist have a habit of attracting anything from weretigers to ninjas to dragons…and so many other things…(how else did they become main characters?)

Note to self: Elves, Dragons, and Angels…though all very cool…don't always work well together.

oppss...not new I am tarded... don't mind me read the date wrong.

starting a new one, can't wait to see what you do with it

I can tell Kaelah and Rianna would have one hell of a time working with them too (my characters in my main comic). anyways, this page aint yucky, it's rather awsome to me, ^_^

I already see Owazero and I wouldn't get along.

Grimlock! :D *ahem* I like the random girl being waited on.

Me, Riot, am jealous of digital work! Sorry, I was watching Transformers episodes with Grimlock in them today.

I dunno if anyone else readin this has ever worked waiter or waitress as a job... But let me note that Owazero is now like... the coolest waiter evar.

thanks for visiting my Speesheez page ^^ Check this out: [url=http://www.drunkduck.com/DrunkDuck_Speesheez/?p=228358]Civil War: Whose Side Are You On?[/url]

I have to say I love the colors on this comic you did a wonderful job. although I'm al ittle confused on a bit so the girl is a mangaka or wants to be one. and now she opens a cafee? X.x I'm so confused I do appolgies maybe if I get more I'll understand but still lovly job so far.

Srry. It tricked me into thinking I could edit my comment.

Oooo blue fox cafe huh... I should stop by there one day *grins* :D