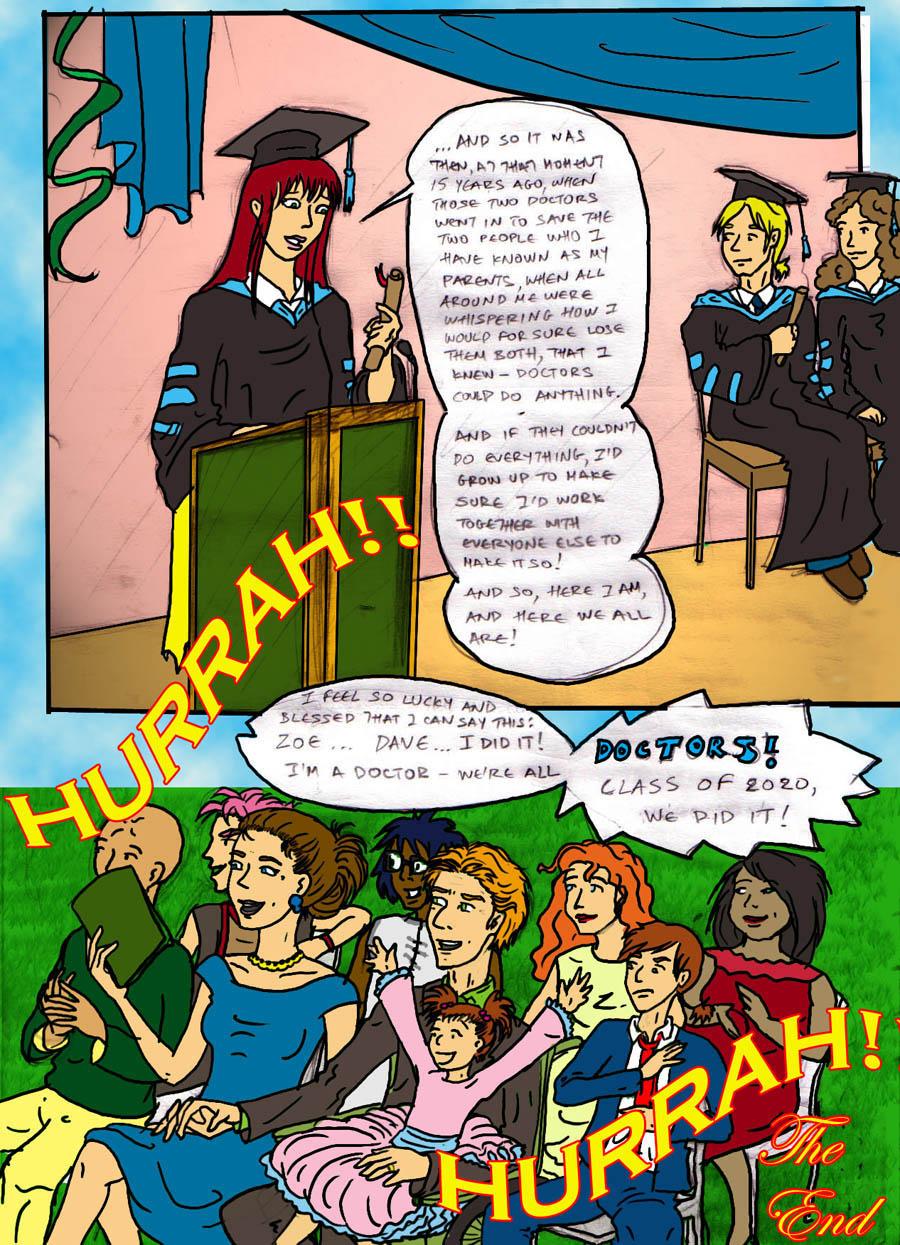 And so this is it!

I was with DAJB on this one- this was a story created for entertainment purposes only, and so every mystery/action story deserves a happy ending.

I NEARLY NEVER HAVE A CHANCE TO WRITE SAPPY HAPPY ENDINGS, I'M HAP-PEY!!!

Now you must decide: did Zou Zou account the entire adventure to her graduating classmates, or did she simply tells us about the happenings in the epilogue?

Honestly, I'd planned a lot more cameos and some I ended up unable to employ (like Steve of Life and Death) in this epilogue the way it ended up being structured. But will I let this stop me??

Be alert for some shorts, little stories of a few pages each about Dave and Zoe after Wolf, what with Dave's new status (what do you MEAN you didn't notice his wheelchair!?) and with those two kids there (yes those are his kids and Zoe's- and the pink girly dress is something probably Dave picked out and Zoe allowed because she lost in a game of rock-paper-scissors), and a ton of other things…

…and ALL my cameos that I couldn't fit in will be there, with speaking roles, too! :D

There then- it's the ending, we're done, but are we finished???

Hope you've enjoyed the ride as much as I did :)

omfg just now I see this page! wtf! with a cameo of my Paula and everything, I didn't know! I'm glad I had to do some research for... hey! what an awesome ending, I couldn't believe it when I saw zou zou grown up and zoe and david with a new kid! that's... just made my day :D

Wow, I just read the entire comic! :) I can remember when you first told me of this idea. I'm sorry I missed out on such a wonderful adventure for you, until now. It was awesome, T!

and you are very right! Physio for Dave was torture, relearning things and learning others (just self reliance is a b****, or getting in and out of the chair on his own), having to explain to his sister that he can't do everything he used to, seizing up with cramps, and so on and so forth. That's why making a comic short with how the proposal to get married to Zoe occurred has material more than fluff to present :)

Ack, I hadn't commented on the last page yet?! Not that I can say much I didn't already tell you =p Just that I'm glad things turned out so well! They don't seem to have had such a super overbearing life. Though I doubt everything was a walk in the park for the few years after the accidents. Those may have been more challenging than the whole comic!!! O_O

Jenshin: Two, actually ;) The boy too. Thank you! I like it when I can do that for my stories, too.

Awesome!! Everything ended up okay! I like my stories dark, gory, and heart wrenching, but I like it more when there's a happy ending to make the whole thing worth it in the end! Great work! Go doctor's!!!! And woah, they have a kid?

Lance Danger: thank you! Thank you for sticking with this to the end1 Darth Mongoose: Thank you ;)

Darwin: thank you! I will definitely stick around.

Awww....What do you mean it's over!! LOL! That was a great ride Tantz! Really...lovely that you were able to find a way to end all that madness on a happy note! Looking forward to the short stories! Take care and see you around!

Hero: haha! maybe! peipei: I agree! But at least he has a life. DAJB: Really??? that is so interesting! And my new project will be up and running pretty soon! I bet you will definitely like it, knowing your tastes. :)

If she did, then that might be the longest graduation speech in history.

What a cute ending ^^ I'm glad it ended happily :3. Kinda sad that Dave is in a wheelchair though, but atleast he's alive :3.

Yay, for happy endings! Great end to a great story, Tantz. Already looking forward to seeing what else you have up your sleeve! Oh, and Boo in civilian dress? I think you must have been sneaking a peek at [i]my[/i] epilogue! ;-)

usedbooks: Ha ha! Thanks! Yup, Fudo is still going to cut people up XD XD He doesn't have any disfiguring scars on his face because he didn't fall face first. What there is there though in other parts of his body is another matter all together. But yes, he got off lucky since he got off still alive and able to live on ;)

Btw, you had me really worried with her speech. ^_^; Typical Tantz style, laying on the suspense and jerking your readers around. XD

Aw, that's so sweet. ^_^ Wheelchair seems to be getting off lucky. Amazing that he doesn't have disfiguring scars (plastic surgeons can do anything too!) Also, Zou Zou all grown up is so pretty. :) I am tickled at alternate universe Fudo in college (med school even). Thanks for including him. I'm looking forward to your future projects, Tantz!

Simply fantastic! This was a great ending, Tantz! Thanks for the cameo too for BLNT!

YAYYYYYYY!!!! I love it! And thanks for the Phira cameo, I recognized her immediately! Wheeeeeeee!!