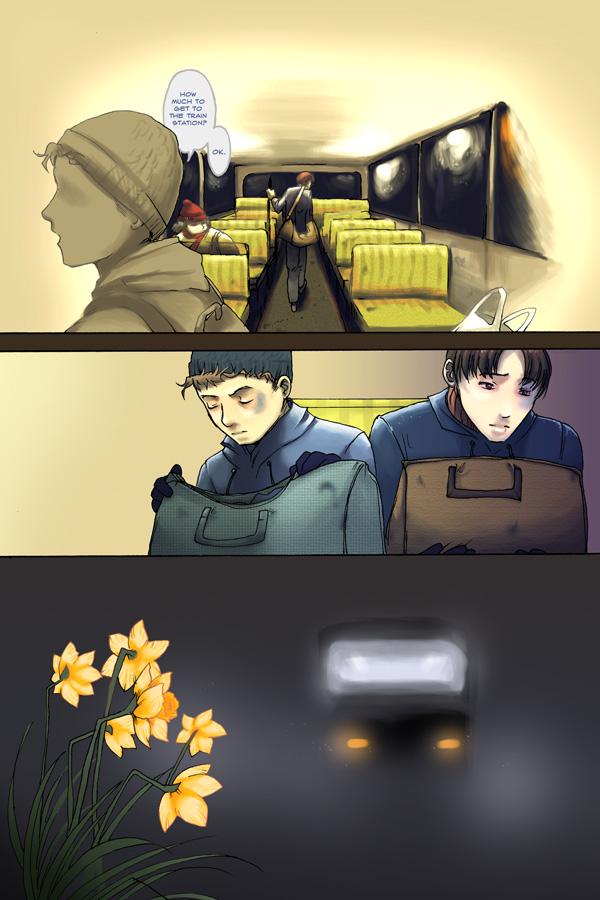 This looks like the ending… but there's more to come!

Thank you very much to all the people who've left me their opinions so far. I knew I'd be overjoyed to receive even one, and it's great to have feedback about different aspects of the comic. Someone has asked as to whether the two are brothers; I imagine they could be brothers or just friends. I originally intended them to be friends (they even had names, but they're never mentioned XD), but the interpretation is entirely down to you.

In this page and the ones that followed it, I wanted to use the sterile, garish colours that strip-lighting lends everything, to contrast with the peachy nature colours used at the beginning. It may look hideous, but it has its purpose!

… I've said rather a lot about this page, haven't I…

I love the way you show distinction between linework and color and light on the last 2 pages.

The last panel has me - it went from a beautiful day...and then this darkness fell - but the flowers remain colorful! Would love to hear what that interpretation means with the daffodils.

The reoccurring theme of the daffodils are really pulling it off!

Wow. This is stunning.

these 3(maybe 4 if you count the silohette insert) panels are so simple but they are perfectly chosen to communicate so much with so little. That's good story telling.

It's -good- when you say a lot. This comic's totally getting featured.