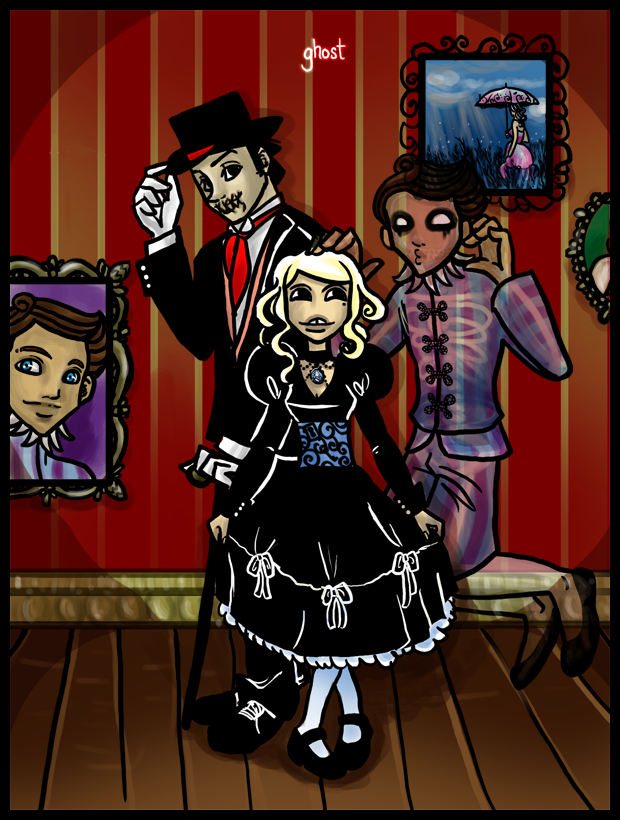 I was surprised the name “ghost” wasn't taken on Drunk Duck. Is it haunted? OH hehhahaohohaooeohoahoa. (Seriously, is it?) Or maybe everyone else is way more creative than I! It's a story called ghost about a… ghost! Whoa. How original.

This comic isn't going to be too long, or that original, or deep. I don't even know the character's names, they go by “boy, girl, and ghost.” Maybe I'll have readers give them names, I don't know. What d'you think they look like?

nice page:D cute girl but her teeth seem funny to me

hmm i saw the girl and thought "Anna". lol xD

Oh, and Alister, Georgia, and Tobias.

Wow, it wasn't taken, was it? (obviously.) That's amazing! I was intrigued when Astronauts wasn't taken, but this is something else!!

I LOVE how you shaded and drew the guy on the right hand side. The transparency and the bones that you can slightly see are great! Faved, of course!

Viola, Fredrick and Shmoe (since he was dead for so long and forgot his own name) (;

@emily_elizabeth: Thank you!! Yeah, it's kinda funny, how I draw ghosts. This one has skin and bones and everything. XD But is a ghost...? I dunno. @little_swan: I wish it was for sale!! That'd be cool. @ulrika: Yeah, that's one of my favourite parts of this cover. XD He's a ghost, he shouldn't have to be all 'ooooooo' scary. @curlpop: Very nice! I'm going to make a list. @avie: Maybe he'll be French, now. Readers! Contributing to content!! I like your suggestions!

Whoaaa a new comic. Sweet. Nefy brings up a neat idea, a french name. I can totally see a french name for the fellow floating in mid-air. Like Andre or Pierre. I can see the little girl as a "Elizabeth" or "Janis" or "Margot." The fellow with the stitches, I can see him as "Isaac" or maybe something sophisticated like "William" or "Julius" or "Thaddeus."

the guy has a creepy mouth and the ghost looks as if he likes to scare people for fun. I'm really looking forward to the rest of the story :)

This looks like its gonna be awesome! I love the characters, they're all so cute and cool-looking! I especially like the ghost guy, and how you made him transparent! *faved

@nefy: OHHHH. Those are nice names!! Jacques makes the ghost sound very French. Maybe we'll have nominations and a poll at the end?? And I hope you won't be disappointed!! @aghammer: Y'found me! And I hope that's not the case... I hate riding the bus. Is it a crowded bus?? And thanks!! I have little practice with digital colour, just in the past year or so I've been trying it out. SO I HOPE TO IMPROVE WITH THIS ENDEAVOUR! (Sorry, it's three in the morning here.) @nicol3: I know!! I hope to do the name justice. Focccusss. And Lily is pretty good! Like I said up there, maybe we'll do a poll or something.

It hasn't been taken? Lucky you! This page alone shows promise. The little girl looks like more of a "Lily" to me, but I was never good at naming my characters. Good luck on this.

Very nice. oh yeah, the last person that used ghost got hit by a bus and still haunts it!! (can you imagine having to ride the bus forever)... HAHA. Anyhow, I love the color in this one.... faved, of course!!

Samme, Penny (Penelope) and Jaques? I don't know, I suck at names. I always pick the simplest ones I come across since readers relate easily to recognizable names. P.S. Like the art, can't wait.