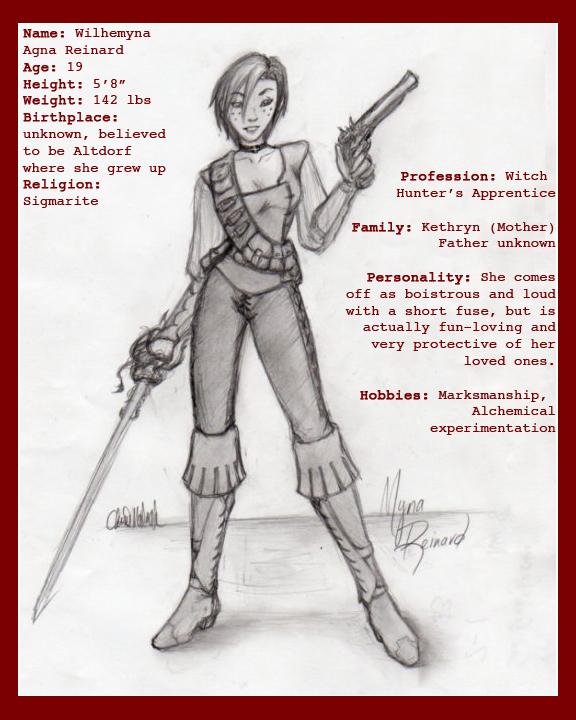 Myna grew up on the streets of Altdorf. Her mother, a down-on-her luck prostitute, tried to instill a sense of righteousness and self worth in the girl as best she could. She encouraged her to find a way to support herself and make her own way in a fashion that didn't rely on others. And didn't rely on being on her back. Her mother tried apprenticing the young Myna with a few “lady-like” professions- tailoring, baking, apothecarying, but she was horrid at the first two and with the third the lady of the house kicked her out because she thought she was seducing her husband (despite the fact that it was the other way around and Myna was trying to fight off his advances.) After that particular event, she prayed for guidance from any god that would listen.
She got no answer.
Disheartened, she made her way home; or would have. A ruffian accosted her shortly after she entered the slums, and started making advances. Myna could fight, and did, but the man overpowered her. He would've had his way with her were it not for a swift kick to the groin. Myna ran, disoriented, but the man followed with murder in his eyes. Stumbling down near an empty stall, Myna was cornered. The man advanced, and stopped dead as a thunderous sound echoed round the alley. The man slumped forward, a bullet through his head, and a Witch Hunter standing behind him.
After seeing her home safe, the Witch Hunter tipped his hat, not expecting a thank you, and made his way back to the chapter house. Myna had gotten her answer; the next day she enrolled as a Templar, with what gold the family could scrape together.