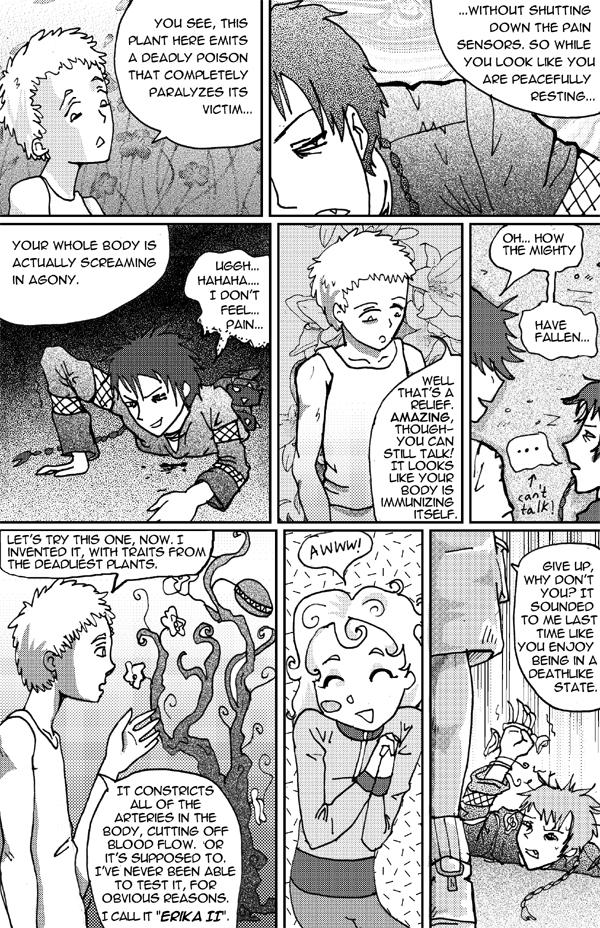 name-that-movie/broadway-show-reference!
I'll give you a hint: “Poor, all my life I've always been poor. I keep asking God what I'm for. And he tells me gee, I'm not sure. Sweep-that-floor-kid, oh! I started life as an orphan, a child of the streets…” (yup I am a theatre nerd too.)

Hey guys!! what's up. Oh man, I gotta finish my page of the optimist (gruhh it's so boring cause I have to sit there and wait for the paint to dry!!!!) so I'll keep this note short.

Here's a new page. I worried that Leif would seem out-of-character doing this stuff, but.. idk. He remembers Zombie liking to be almost-dead (like last time! a whole… 100 pages ago!!) so maybe he thinks he's doing Zombie a favor.

I discovered who MoonPearl is… MY LITTLE COUSIN!!! heLLO MOONPEARL!!!
At my mom's birthday party last saturday, my cousin revealed that she indeed was moonpearl… which was uproarious because my brother and I were like, “Who IS this moonpearl person anyway??”
Anyway, being around my little cousins is a total ego boost/blast, cause they a.) are very sweet to me and b.) love my comic! So usually when someone asks me what my comic's about, if I say over ten words, their eyes glaze over. (I've gotten it down to an art: “manga about political assassins funny romantic action dramatic online.” sounds more like tags, but lol.) BUT my cousins, they're like, “so tell us how Leif became an assassin!” And I tell them the whole thing in extravagant detail and they actually like listening about it!! My aunt was like, “Girls we have to go soon” and they were like “Noo but we wanna hear about Zombie's tragipast!” Literally this happened. I love them *heart*heart*heart*heart!*
my little brother, too, is a bit like that, but with a shorter attention span.

Anyway… ohh you know what I was thinking? Zombie's past is very long (with reason– he is 300 years old!) so maybe I'll do a whole chapter of his past? Or better yet, maybe when I'm done, I'll do a “one last hurrah” Zombie edition??

Food for thought. Cause the whole “antarctica” part (hah you guys don't know what I'm talking aboutttt *gloats*) is probably too long and esoteric to really fit in with the misfas chronicles.

ok! I did a cool drawing of eve that's in the middle of coloring!! I just need help deciding a background!! so go to this thread and give me your opinion, sil vous plait!

ever get owned so well that people have to complement you on how easily you make slipping into deaths grip look? yeah well heres another perfect example. (5/5)

Yeah, that's my favorite part of "Skid Row/Downtown" to sing, too-- Seymour is so cute! Although "The Meek Shall Inherit" is great when he's like, "I take these offers, that means more killing... who knew success would come with messy nasty strings?" I guess I just like Seymour's vocal parts. ;)

*oh! I started life as an orphan!* *Some one show me a way to get outta here...cos Ill constantly pray Ill get outta here...* man I love that song, my fave from Little Shop Of Horrors! haha I discovered a musical the other day, something called 'the newsies' it looks cute XD I like this page, what a cool way to bring people down! and how nice to have cousins that love your comic lol, on the rare occasion its really fun being able to talk about your own comic!

see! by working didligently, u didn't get incinerated

For a peacefull kind of guy he sure has a few plants that are rather...cruel o.o

aw, jonko, I miss you too :D but hey you're still a VIP... you can say you've actually lived with The Kristen Gudsnuk. *giant ego* lol UB: man, you should brag more often... although do it in a way that it doesn't look like you're bragging ;P

ugggh so jealous of moonpearl. I miss the days when you used to tell me about your story and i was like "oh my god i'm a VIP coz i know extra stuff." But anyway, I really want an Erika II in my room. I think it would go well next to my mom's parsley.

Feeeeed me!! Aw, that's cute about your cousins. I avoid talking about my comic. I think I'm ashamed of it. If asked what it's about, I just say it's a crime drama.