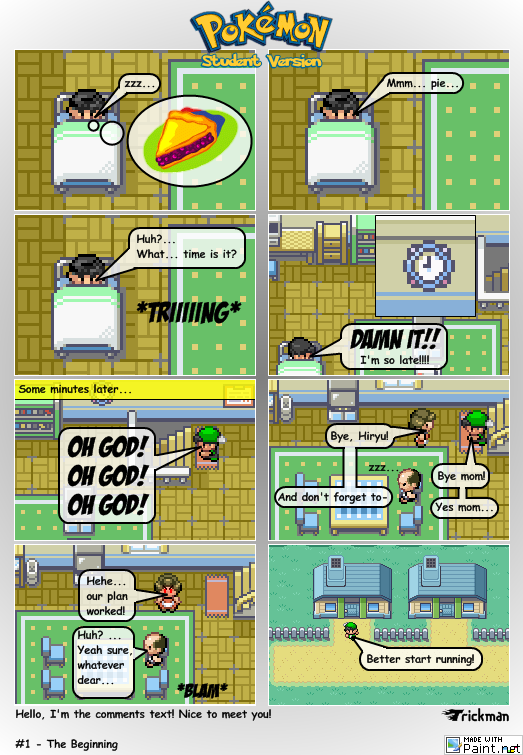 I don't know where Trickman is, but, I managed to find the first issue he ever sent to me. Here you go..

...i dont know where he is...but i still think he hates me...SO I SHOT HIM!!MWUAHAHAHA!

Nope. But, I liked the idea for this, maybe I'll end up continuing it.

@Kevin: I do! So, we still don't know where Trickman is?

@ Everyone: Does anyone on DrunkDuck actually read author notes, or what? ...Actually, I have on one my K drive, somewhere, too...

Hehehe, it's funny cuz I made Mark a school Bg for that too. :D

That's normally bad... I can remember anything thats happened before January 1st of last year :-\ And.. MEV beat you all. Mawhahaha... I wonder when I'm getting a script for that.. :S

Yeah thats how Pokemon Academy is going to be since there hasn't even been a class yet, I'm going to have a cafeteria and stuff but I guess this is ok....I remember that far back because I have a good memory?

Yeah but Im pretty sure every kid in america had pokemon fantasies it was really bad in third grade when me and my friends at recess would go to random animals and pretend they were pokemon. ex. butterfly=butterfree

Not idea-wise. T_T Like, it won't be similar at any level. For example, your Pokemon Academy seems to focus more on the fighting, jokes, and well....some other things. This, If Trickman ever comes back to it, wil focus on the students, and school. I like, built the school inside-out for him and stuff. Lockers, gym, cafeteria. Everything. Just wait and see.

How can you remember that far back..? What are you, 7?

@Jaffar: I think he means the story is way difrent than yourse.

How do you mean? I thought up the idea when I was in the 2nd grade, about 7-8 years ago when Pokemon first came out. My brother was asking me if I thought there would be any cool way to make a Pokemon game and he said to be a Gym Leader and I said to be have a school...So what do you mean?

Don't let that feeling get to you. This was planned out far more ahead than Pokemon Academy.

I have a strange feeling, that this is going to be similar to Pokemon Academy....

I was wondering when this comic would get an update...

Nevermind, read my PQ instead.

wow for a little while i thought this would never update anyway nice job!

Perfect amount of time for Trick to make some awesome return or something.