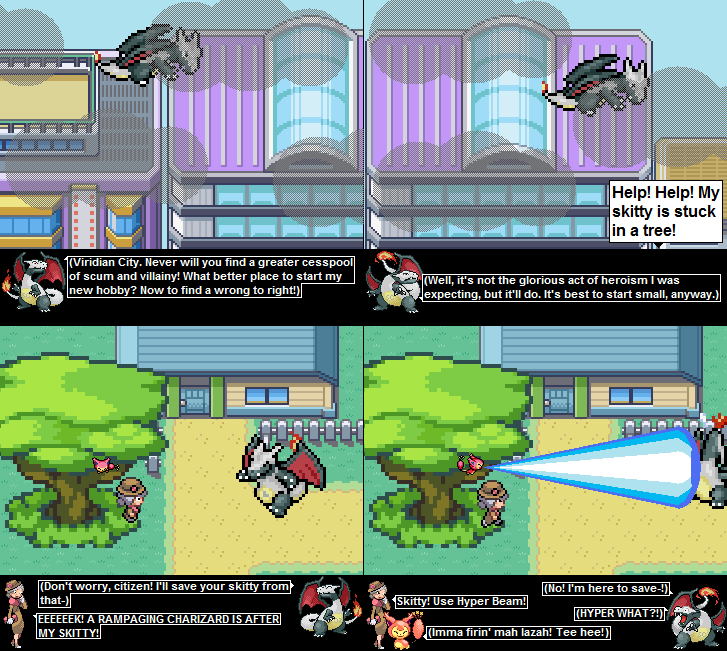 155: Hyper Beams! His other one weakness!

I had to rush the end a bit since I was running late, but aside from the horrible clouds I had to make from scratch, I think it came out pretty well! Also, the clouds are dark intentionally, cuz Viridian's supposed to be a big city full of crime here. With cats in trees that know hyper beam. And yes, I realise the “Imma Firin' Mah Lazah” bit is one of the most dead horses on the internet, but I felt that skitty should say something and couldn't think of anything else at the time.

Sorry for the lack of comic this week. Sis has been on WAY too much lately, and I had way too much homework. I'll have one, maybe two, next monday.

Skitty can't learn it, but it's a gag comic right? Whatever.

I'm pretty sure there's a TM for Hyper Beam. I know, cuz my sister was a bit of an idiot and bet her Jirachi in a pokemon battle against a mudkip or something stupid like that. (Krotar does not lyke mudkipz) When I finally convinced the snot nosed kid she lost it to to give it back, it had Hyper Beam and hadn't gained many levels.

over used joke for the win.