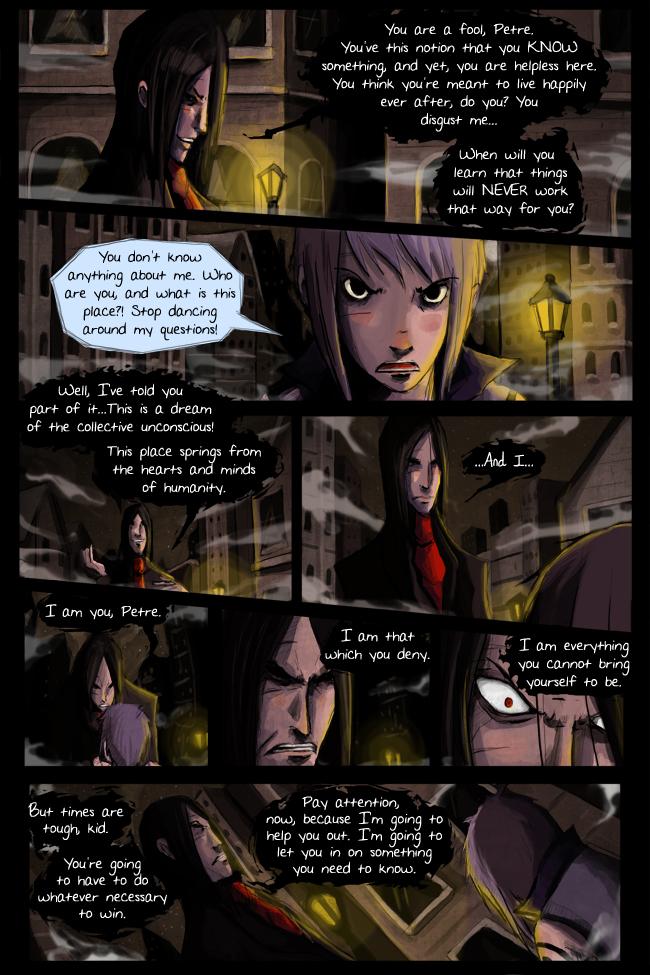 So with this page comes a new look with some new techniques I've taught myself over the last week and also a bit of possibly sad news. Unfortunately, after trying to print Issue 1 for a while, I've come to realize that there is just far too much wrong with it to ever work right. Normally, I wouldn't mind so much, some things CAN be fixed, but there are technical problems that are insurmountable and I really want to print this for a number of reasons. So here's a list for ya:

A) Fonts are too small, overall.
B) Some pages are not formatted right, size-wise.
C) Colours are far too dark

On top of it all, I realize I can do things infinitely better. That, in itself is not a good reason to go back because I will probably ALWAYS feel that way as I improve.

That said, I'll be restarting my work on Starsign, chapters 1 and 2. That means the story is sort of on hiatus until I catch back up to where I was. I may attempt to do a new page here and there to keep the story going but it may not be worth it.

So why do this? Starsign is supposed to be a learning process, but it's also a project very close to my heart and I would like to make comics my job. Doing that will require a lot of effort, a lot of work, and a lot of making sure that I'm doing things right if I ever want to sell some issues.


SO! Let mek now what you think of the page. If you decide to stop reading, I understand, but I promise that things will be more interesting when I redo them at least. New angles, some new insight, and hopefully some smoother dialogue and story!

I hope people will bear with the process and keep reading :)

what if you edit your last pages in photoshop?

Amazing strip, I'm so inspired by your art.

Your style is refreshing. Funny that both you and Ashwara (Para Ten) are going to re-do everything. Aren't you guys just the same person? :-P You seem to be friends, draw in a very similar way and well.. go on hiatus around the same time to do things over. I smell a conspiracy! ;-)

Ah, cool new style Kiah. The expressions of this new entity really give him that pushy feel of being alive and touchable, nice job! SlideStudios...! The black bubbles are stylistic in that they don't have a boarder. In some manga bubbles don't even have tails but we still know who's talking. The line would only need to be added if it was a part of the style, or if, for some reason, it was unclear who was talking, but I'm sure EVERY SINGLE PERSON HERE can tell it ain't petre. Kiah! Such lovely life ambitions, for I too wish only to break into the comics industry! Well...I only need money to stay alive...so I can make more comics! I'm on my seventh version of the comic I began to get better at art, myself, and oddly enough I have restarted it because I too also ever wanted it to be just perfect. Quite recently did I begin the seventh version (like...I just finished the first two pages 15 minutes ago) so all I can say is, if you want it to be perfect for yourself, do it however, and as many times as you want. Doing it for other people is a second reward for you and them. Remember, being a comics creator, someone who does both art and script, pays dirt. Pays LESS then dirt. If you aren't insane, do something else for a living. I...hope you're insane. For the sake of the continuation of the hardest medium known to the arts, I hope you're very insane. It's so lonely being the only one off his rocker.

i think this page looks really great! if you want to fix the other pages to the quality of this page i am willing to wait! youre doing a great job! and if there is going to be a printed version of this comic availible in europe i would be glad to buy one to support your efforts!

I think the page is wonderful.

I'll be here when new or old pages are posted. Good luck! And you blew me away with this page. It's really professional looking!

Oh, and I've already got the two prologue pages' thumbnails done and ready to go! So that's a good step in the right direction :D

Thanks everyone, seriously! It means a lot to me to hear such kind words. Things here are so busy and I'm trying to keep going with a weekly schedule -at the very least-. I hope to be back up to this point in the story by the end of Christmas Break, that is, January 23rd. I'm shooting ot be done long before that, but that's the absolute deadline I'm giving myself. I'm taking suggestions to heart as well, about fonts, bubbles, and style so you should see some of those changes next week with the new pages. Next week (or the week after at the very worst) you'll see a couple of Prologue Pages. I'm debating whether or not to get the cover art done first, but we'll see how that goes! Starsign MAY end up going grayscale, which sounds not so interesting, but will hopefully result in higher quality drawings, more visibility, cheaper printing costs, easier printing, and better backgrounds :)

This is my favorite of the new comics I've discovered in the last couple months. I've got no problem waiting for the rest of the story. Are you replacing pages as you fix them?

I will def keep reading, this is way to good to give up on. I really like the new techniques you have on this page, and can't wait to see what you are gonna be doin with the older stuff!

I think it is a great comic and worth printing out. I dont mind waiting. lots of comics, even pros, go on a break. I dont know how I feel about your font. I may just be used to the standard comic font. All uppercase, simple letters. Also it is a bit hard to see the black ballons tail. I think even black ballons still get an outline. doesn't have to be white, could be red or blue or a grey. You art though is awesome.

Dude, I'm goin' nowhere at all. You do waht you need to do. Starsign will remain in my faves, and I'll check in when you post something new. Great new page, by the way.

i'll be back, but i really liked how your style kept evolving, it was fun to watch and see how differently the first page looked from this one. too bad nothing could be done. keep up the good work.

Well, I'm probably still going to keep on reading, even if there is several months hiatus. Its not like every single comic on Drunkduck is still being updated weekly and yet I still keep them on my favourites. I'll just keep watch for the * :D!