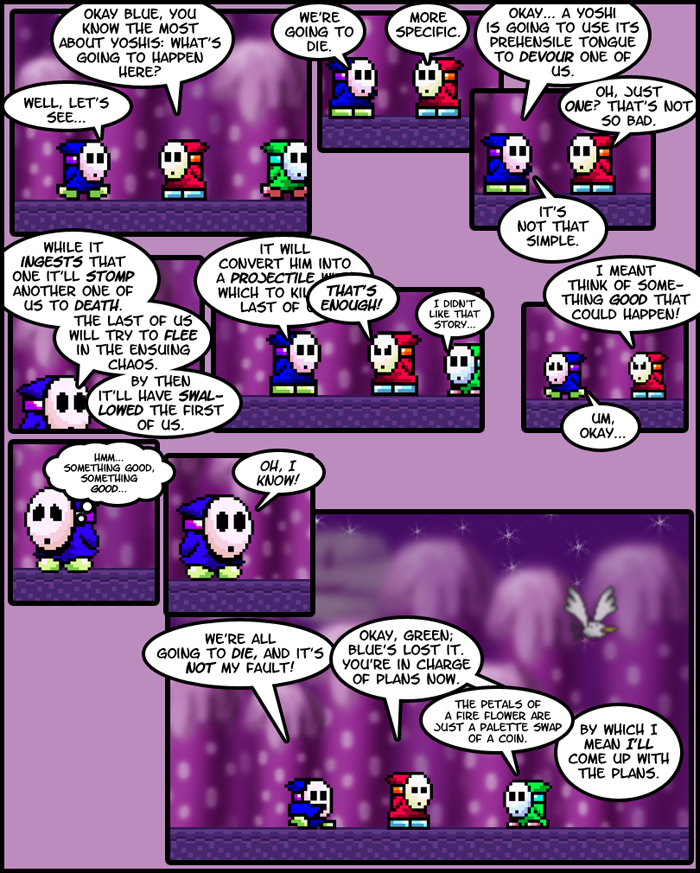 Not entirely true, but you have to admit they're quite similar

I'm starting to think I can consider this “Experiment” a bit of a success, since I regularly see comments by people who admit to disliking sprites saying that they like this series. I think the only step beyond that would be to somehow make this series so good that people don't think of it as a “sprite comic”, and just think of it as a “comic”. Personally, I think that's like saying, “I hope people stop calling this ‘The Ocean’ and just start thinking of it as ‘water’”. Still, experiments once thought successful have proven the opposite in the past, so I'm going to keep it up for now, and see where tomorrow takes me and the Guys.

This comic has died. I officially declare this comic dead...

I-I never noticed the coin-flower thing in all my years of gaming! That's awesome. And to those who hate sprite comics, they are perfectly fine as long as effort is made (here for example). 5/5

lol this is actualy funny, you should keep updating it

Super mario brothers...the fire,flower,coin in question was probably programmed in a language like Q-basic. WHich means that the Programmer had to individually set up where and what color each pixel was until it was time for him to arrange the levels. the pallete swapping back then was nonexisent as all graphics had to be generated by hand. Mario bros also probably took a good long time for the programmer to make.

I'm just really not excited for this series anymore, especially now that I'm in school and all. I've considered finding someone to handle the construction part of this series for me (put the actual comics together), but really I felt that the construction was a big part of what separated it from most sprite comics I'd seen, and I didn't want it to lose that.

Is this done? Or have you just not really had much time to do another?

....He's right. Normally, I don't like sprite comics too much (except for 8-bit theater, but that's something else) but y'know...you're right, the Shy 'Experiment' is turning out really well!

very nice, I really have nothing to suggest, you have background, stances, jokes, everything.

I think shy guys were a good thing to do a sprite comic with- they have big, simple faces so its easier to see changes in expression. With a lot of sprite comics, any change in expression is usually hard to see because of how small the faces are. I don't have a problem with the funny sprite comics, but sometimes it bothers me.

To me its not a sprite comic... its just a comic with strangely drawn charachters.

Oh, and to let you know, I never once thought of this as being a sprite comic. Seeing as you don't follow sprite rules but rather comic rules, it don't think it's anything but a comic.

Well, the concept of a Mario sprite comic is very rarely seen. Megaman is the most common (so it will always get lower). LOZ is hard to do since the only way to make a good format with it is the second game (and people do not like the appearence). Kirby and Sonic had their own shows, so that leaves them out. So: -Mario, Donkey Kong, and Metroid are the only ones which people WILL give higher points to. Plus, you use different panel formats and most strips are 3-4 panels side-by-side.

While I am not entirely a fan of sprite comics, I do so love the shy guys. shy guys rock. We're talkin' Heavy Metal rockage.

for once its not his fault

How come I never noticed that about the coin... dammit... yer right!