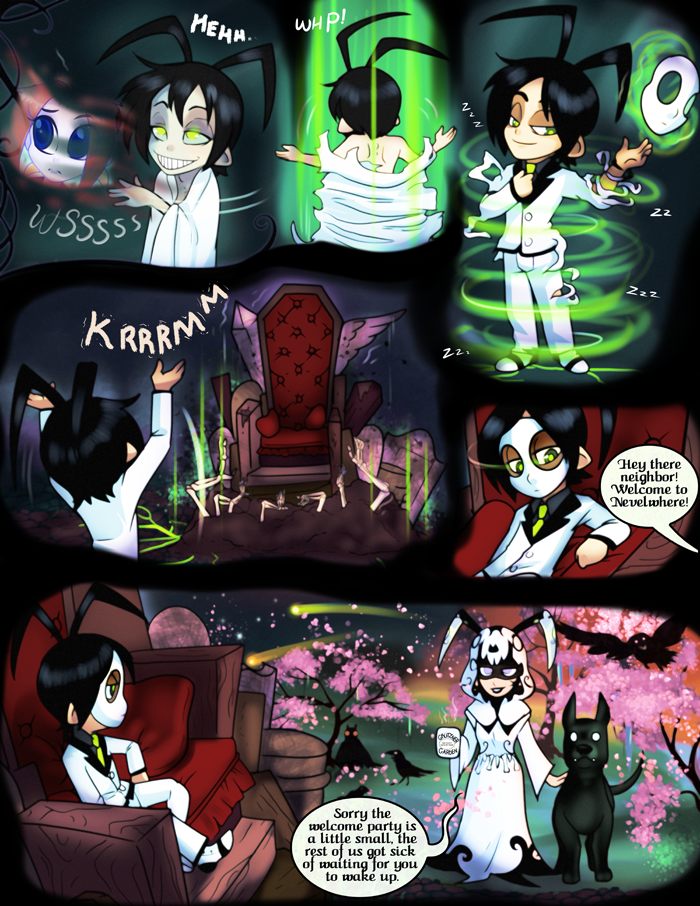 Comic is a little late this afternoon because I had to catch a secret archive up to a certain point (I'm surprised nobody found it before now or if they did, I wouldn't know because hardly anyone comments lately, those of you who do are the ones keeping my shriveled motivation alive!)
You wanna know who she is? It's a quick read up to her intro, but we met her in the Patreon comic Vagabonds(this archive has only half of what's on Patreon right now, but Patreon's archive reading is the WORST so I'm posting the old stuff slowly on its own site)

Those of you who are well read up on my CTV-related posts already know what this means for Fernando– he's something called a Nevling! I will let the comic explain what THAT is rather than post an info-wall here! I'm sure at least someone thought his pointy ears, hair antenna and magical undead-raising powers were unusual for a mere zombie… once we really get into it, it's gonna explain SO MUCH!

Well, I can certainly say I'm glad I didn't give up on this comic before we got to this reveal. It would have been lame to just drop that as an aside in some throwaway post.

I am once again immensely confused. @v@ *reads description and then Vagabonds* Woah, so... UIU is officially connected with CTV now! :O And Nando is actually a special type of being!! 8O ~mind blooooow~

I like your sound effects. You always come up with creative combinations of letters. I know that's a strange thing to complement on.

Aw not at all! That's the sort of thing I like to notice and compliment on other folks works myself! I'm really glad to hear that actually, it can be a challenge to transcribe the proper onomatopoeia from my head. I hope to one day achieve Don Martin levels of sound fx. Also, looking at non-english comic sound effects for comparison helps! Thank you so much!

Oh, you've been putting Vagabonds up on the main site? I'll have to remember that next time I reread it! Got to agree, Patreon really doesn't work well for reading through an archive. And still dying to see where things go from here!

I have, very very slowly though! Yeah Patreon needs to fix that badly. A gallery/page archive function would be nice as opposed to infinite scrolling and waiting for it to all load. And a lot of my early stuff wasn't tagged so it was a BEAST to sort through and tag! And the search function is crap too because it searches the entire site instead! They made changes to the site and it was all the wrong things. The new logo makes me laugh it's so bad. What is that, pong?!(´▽`ლ)