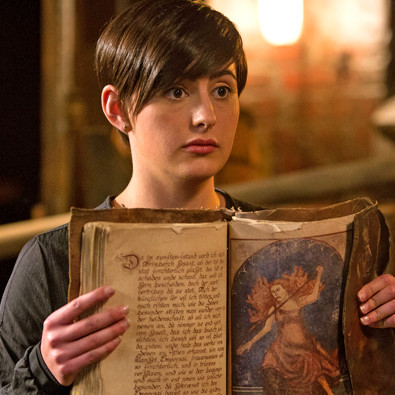 In a chat where we were discussing our comics, Pit-Face told me that if Bones from Putrid Meat is Odysseus, then Blitzov from Epic of Blitzov is Gilgamesh. And that very solid analogy of the two characters’ function in her stories, got me thinking about how myth of all sorts, from age old mythology to urban legends can be reincarnated in a modern tale.

Usually, it also is a very audience-gripping tale that keeps the interest and taps into the age old questions, fears and hopes of humanity as a whole. It isn’t an accident that most mythologies across the ancient world have recurring common themes.

I once read a quote that every plot has been already told- what is different in every incarnation is the spin each creator puts to it. In previous newsposts about originality I’ve stood by that statement, and I suppose this discussion does too, on a tangent.

So from TV and Cinema to Webcomics, incarnations of myth seem to consistently have an extra appeal to audiences: Grimm, Once Upon a Time, Halloween, O Brother Where Art Thou?, Dr. Strange, Harry Potter, The Hunger Games, the comic Dawn, Lady Death, Storm, The Tarot Café, DD’s Purgatory Tower, Putrid Meat and the Epic of Blitzov, and countless more that have managed to connect the mystical myth and legend to some manner of modernity (or the future) have an easier time establishing traction with their target audiences.

So what is it that makes it so, and how do we adapt legend to the pedestrian reality we experience?

In my opinion, what makes myth-in-reality so alluring is first off the charm of the extraordinary wrapped in the ordinary (even Matrix tapped on that)- the capacity to feel that our routine is a thin veil between us and the magnificent, whatever that may be.

It is also this contrast that ‘sells’ the story. Legendary entities hailing from ancient times need to adapt to our reality (like in Thor) or, in the more sophisticated versions, legend occurs and sprouts from that very reality (like in the movie Chronicle). Such stories draw a path for the audience on how to turn the mundane into the extraordinary, and how to feel the imprint of greatness in aspects of their own reality and their own interactions.

On the other hand, another allure is that myth’s nature is to tackle the big questions of humanity’s existence- from mortality and death and the afterlife to what it means to be human, the clash between Good and Evil, friendship and loyalty, the introduction of the new and the groundbreaking in tradition, and so on. Issues that humans always have and probably always will grapple with. A myth that is adapted to modern times and modern concepts, makes this conundrum real and visceral, and as a result, very engaging and interesting.

Do you feel the same way about stories that are based on myth (that you know of)?

I’m saying “that you know of” because often, the adaptation is such that you don’t immediately recognize the myth in it. That’s for next time, though.

Having studied a good bit of Carl Jung, Joseph Campbell, Lord Ragland, Freud too... some think that myths are a reflection of our subconscious (individually and collectively). Many stories (old myths and modern tales) seem to follow the 'Hero's Journey', which some say is a symbolic represetation of all our our lives, from birth to death! I don't buy it that much but it is compelling reading sometimes, and interpreting stories through these lenses is fun (I had a field day with The Prince of Tides back at school)

One reason we use myths for the basis of our modern stories is often for the practical reason of them being in the public domain. ("We" being western culture, since that is the only one I'm familiar with, but surely other cultures do the same with their own stories). I read a pretty great article once about the advent of modern US copyright law thanks to Disney not wanting to lose the rights to their characters to the public domain, thus screwing up the old system of artists being able to build off of collective cultural works. There are also the "universal" themes that we've all come to enjoy through familiarity or perhaps even some common spirit of humanity. In any event, the exercise of taking these old stories and making them into something new and exciting is also just fun to do! I also feel like it is just an old human tradition of telling and retelling stories to subsequent generations. It just feels natural to do it.

Read the classics and learn from them, there's always a reason why they became classics. That's what I've always said, and what's more classic than ancient myths? They define the expectations we put into just about every character we read about. The Harry Potter series plays on this in the way the other characters picture Harry as a kind of underage King Arthur and put the according expectations into him (and are overwhelmingly disappointed if he turns out to be human after all) - he didn't find a sword in a stone or was given that thing by a mysterious Lady of the Lake, still, like Arthur, he got his special status by Fate and is expected to be a saviour of the people and unify all the different factions. This he can accomplish with the help of a Merlin-like éminence grise that seems to be lifted straight out of Robert de Boron's version of Arthurian legend; mysterious origins, unnecessarily anticlimactic death, and white stag included (well, sort of anyway).

Tapping into myth really gives your story some great borrowed gravitas! An example of a modern adaptation that I can think of: Cool Hand Luke. That was doing something biblical... From memory I think Luke was Jesus and the Warden was obviously Pontius Pilot.

Also- Myths have a wide penetration and appeal so people are very familiar and comfortable with the stories and characters. And they're very VERY popular with Hollywood because there's no copyright so they can adapt them endlessly and get a guaranteed audience.